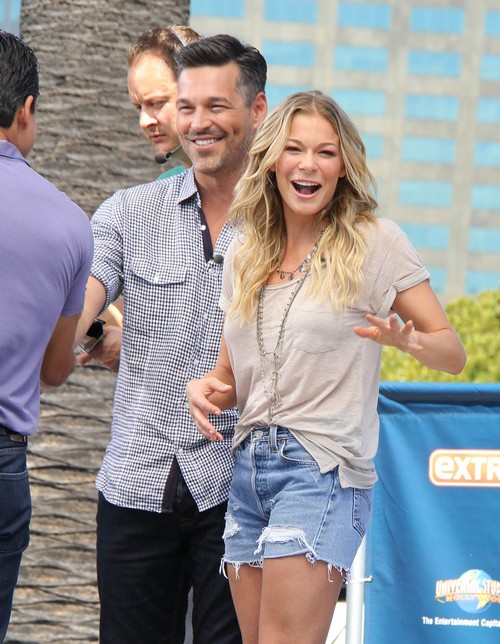 Our exclusive CDL sources report that Eddie Cibrian had a vasectomy while married to Brandi Glanville – consequently Leann Rimes will NOT be pregnant anytime soon. LeAnn Rimes has made it quite clear to anyone who will listen, that she wants  to get pregnant with husband Eddie Cibrian’s baby. LeAnn is worried that eventually Eddie will become bored in the marriage and dump her for the next hot young thing he can get his hands on. LeAnn knows firsthand how easy it was to seduce Eddie because she, herself, was the temptress while he was still married to Brandi Glanville, finally seducing him away from his wife and children with the promise of a better life. For Eddie, a better life equates to more material belongings. LeAnn believes that the only way to have a hold on Eddie forever is to have his child. She knows the love that Eddie still holds for Brandi as the mother of his children and hates that they’ll always have a bond. For now, the only bond LeAnn has with Eddie is a checking account, which he has become quite fond of. But, alas, LeAnn knows that even all the money, cars, and vacations won’t be enough to keep Eddie around forever, and most especially it won’t keep his interest in staying faithful.

Eddie Cibrian knows that LeAnn Rimes is very dependent on him. After she seduced him on the set of their Lifetime movie Northern Lights, LeAnn felt she’d finally won her heartthrob and she wasn’t about to let him go. Feeling like the nerdy, shy girl who’d just won a date with the most popular boy in high school, LeAnn was not about to let Eddie go when he decidedly told her he planned to stay with his family after their illicit 2009 affair. LeAnn was infatuated with Eddie and still remains under his spell, dedicated almost 24 hours of each day to finding ways to keep Eddie around. From expensive gifts, to a home in the community Eddie always dreamed of living in, to a reality show deal for the couple, LeAnn will do whatever it takes to keep Eddie. LeAnn is even so desperate that she purposely eggs Eddie on with regard to anything said or done by his ex, Brandi. LeAnn knows that Eddie will always love Brandi and it eats away at her that she will always have a presence in their marriage. LeAnn amplifies everything Brandi does wrong and spins stories about her to Eddie in an effort to ensure Eddie never goes back to his ex.

LeAnn’s emotional stability is all but gone as she is constantly manipulating stories or concocting new plans to keep Eddie by her side. Every move she makes is calculated, based solely on her incredible insecurity with herself and her marriage. LeAnn never thought of herself as beautiful, especially by Hollywood’s standards, and being with someone like Eddie only intensifies her insecurities. She is always wondering “is today the day he leaves me” or “is today the day I find out he is cheating on me?” It is making her sick. Perhaps all the stress is complicating her efforts to have Eddie’s child, or could it be that Eddie is keeping a big secret from LeAnn that is preventing the couple from conceiving?

LeAnn will be trying for years to have a child and it just won’t happen because Eddie has reportedly had a vasectomy toward the end of his marriage to Brandi Glanville. During the couple’s affair, LeAnn assumed Eddie loved her so deeply that he risked getting her pregnant by not wearing a condom. What LeAnn didn’t know is Eddie wasn’t worried at all about having another child, because he knew it wouldn’t happen. The vasectomy was Eddie’s idea so he’d be free to sleep around without the worry of getting a woman pregnant. Likely his former wife doesn’t even know about his secret, but even more disturbing is that he is keeping it from his current wife who is trying desperately to have his child. The couple even document their struggle to conceive on their reality show, but truly it is just LeAnn’s struggle as Eddie has been both flippant and insensitive to LeAnn’s fears that she will never be able to give him children. If Eddie hadn’t had a vasectomy, he’d surely be summoning his machismo to impregnate LeAnn and keep his “manly” image. His attitude, as documented on the show, is that he could care less and the only reason for that is because he knows it will never happen. He’ll keep letting LeAnn try to get pregnant, only making her more insecure and dependent on finding ways to please him and keep him around. Eddie knows exactly how to play LeAnn and knows how to play on her insecurities.

No doubt Brandi loves to see LeAnn struggle to give Eddie a child, while she shares two sons with the serial cheater. Eddie isn’t too worried about LeAnn finding out the truth either. Eddie knows LeAnn wouldn’t leave him even if she found out he lied to her. Her neediness is at an all-time high and she’ll basically put up with anything Eddie throws her way. Looks like LeAnn is getting everything she deserves!

CDLers…your turn to sound off on Eddie’s secret! We want to know what you think.