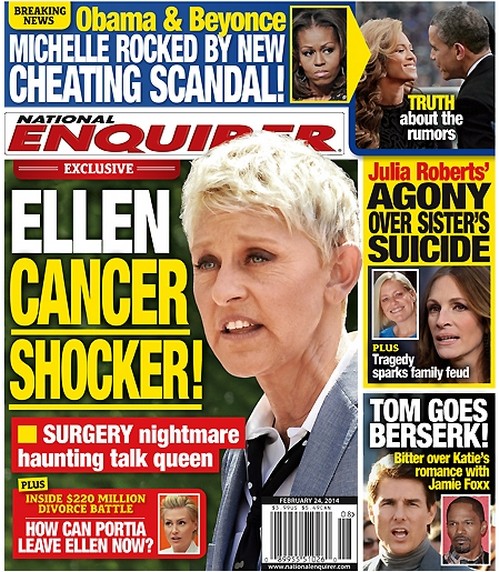 We have been hearing for months now that Portia DeRossi’s marriage to Ellen DeGeneres has really hit the skids. Ellen is known to be a bit of a control freak and Portia is tired of being told what she can and cannot do. While Ellen is super nice while filming her talk show rumor has it that she’s a nightmare to deal with the rest of the time. The obvious tension between them has left Portia ring less and wishing for the career that she once had.

According to the Feb. 24th print edition of National Enquirer a health crisis has only added to the stress between the ladies. Apparently Ellen has had a cancer scare that has been kept under wraps and surgery was involved as well. No matter how messy things may have gotten between them it would be a particularly nasty move for Portia to bail out now in the midst of Ellen’s crisis. No doubt the talk show diva is needing Portia’s support more than ever and it would almost be heartless to bust up the marriage right now.

Also in the latest issue you can get caught up on the story about a triangle that has developed between Katie Holmes, Jamie Foxx and Tom Cruise. Tom and Jamie have been close friends for years and so the fact that Jamie has been hooking up with Katie for months now isn’t exactly sitting well. Also, Nancy Motes’ suicide has been all over the news these past few days. National Enquirer has the latest on how Julia Roberts is dealing with the loss. Do you believe that she bullied her step-sister as has been widely reported? Tell us your thoughts in the comments below!