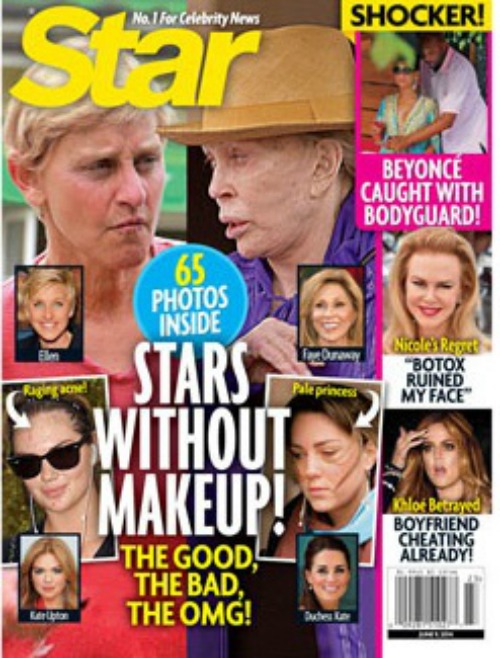 Ellen Degeneres and Portia De Rossi may be having their share of relationship troubles, but is plastic surgery really the answer? You’d think that celebrities would learn from the horror shows that are Nicole Kidman‘s and Meg Ryan‘s faces.

According to several new reports [and Star Magazine’s weekly cover issue], Ellen has been tweaking her face a little bit, although it’s so subtle that you can hardly tell. Mind you, this is an example of the very rare ‘good’ plastic surgery in Hollywood, whereas more often than not, the surgery just goes off the rails. Seriously, take a good look at Nicole Kidman’s face from the Cannes film festival. You wonder why you haven’t seen her in movies recently? That face is why.

Ellen probably won’t have the same problem, especially since sources say that her plastic surgery dabbling was a one-time thing. Apparently, she only did it to keep Portia from leaving her, which may have worked for now. I don’t think Portia is that superficial, but Ellen’s also on television and HD really is incredibly unforgiving. I don’t blame her for wanting a little extra help.

Star’s cover also has a feature on Beyonce supposedly being caught with her bodyguard, Julius de Boer, but I guarantee you that Jay-Z would have raised hell if he actually ‘caught’ his wife with anybody else. There are plenty of rumors, sure, but they’ve only popped up after the Rachel Roy situation. Some part of me wonders if people would even be speculating about Beyonce cheating if it wasn’t for all the rumors about Jay-Z and his rumored infidelity.

Plus, Khloe Kardashian has apparently been ‘betrayed already’, all because French Montana is cheating on her. Um, has she looked at the guy’s romantic history? It seems like he’s cheated on every single one of his significant others, so why she did she think she’d be any different?