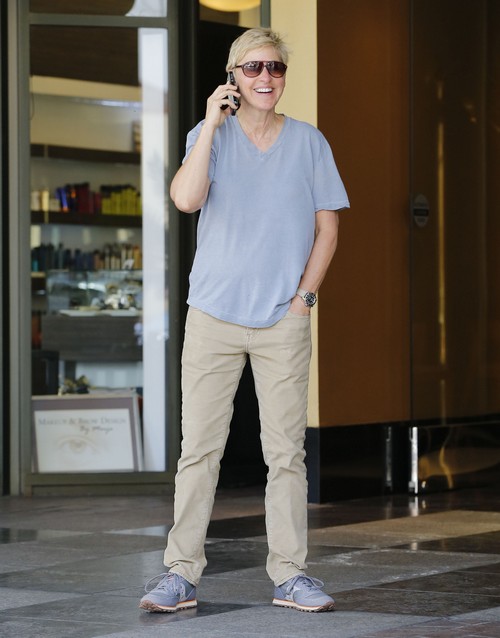 Ellen Degeneres and Portia De Rossi may look like they have the perfect marriage, but according to sources, it’s anything but perfect in real life. Obviously, millions and millions of dollars can buy you a perfect home and the vision of a perfect life, but the reality never reflects this – and unfortunately, it looks like that’s true in the case of Ellen and Portia as well.  Buying a new spa isn’t going to help Ellen keep Portia happy.

Even though Ellen and Portia have been married for several years, sources started cropping up this year claiming that their marriage was on the rocks. Apparently, Ellen and Portia have been fighting about everything under the sun, but their biggest arguments all centered around the idea of having children. According to the rumors, Portia is really keen on having kids whereas Ellen is not even remotely interested in the idea, and obviously this has led to some pretty big blowouts between the two.

There was a recent tabloid report that stated that Ellen had finally acquiesced to Portia’s request to have a baby, and it stated that the two were planning to adopt or have a child through surrogacy. No, Portia wasn’t planing on getting pregnant! However, it looks like that fell through since we’re now hearing that the fighting and the arguments have started back up again, and they’re worse than ever. Apparently, Ellen changed her mind on the whole kids scenario, and Portia got so fed up that she temporarily walked out of their home.

Ellen’s already publicly discussed the rumors about her marriage, and she’s dismissed them as being completely made up. However, I always find that if a celebrity takes time to clarify rumors of their personal life in the press [unless these rumors are completely outrageous and damaging], then there’s usually some truth to them. In this case, there have been just too many people coming forward about Ellen’s relationship troubles, and even if her marriage to Portia isn’t in the dire strait that the rumors suggest, it’s quite possible that they’re still have some difficulties.