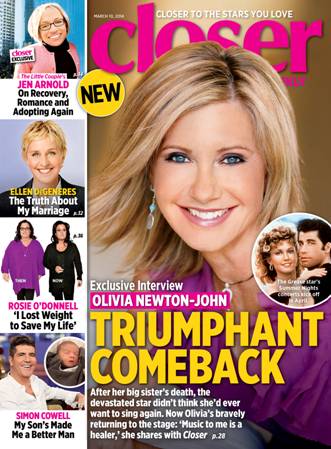 Whenever a celebrity goes to People and Closer to discuss the state of their marriage, something is very wrong – especially when that celebrity is an A-list comedian like Ellen DeGeneres. Instead of just joking around about the tabloid’s breakup rumors [which she does], Ellen’s seemed to have taken it one step further and has decided to go to every tabloid she possibly can to deny rumors that anything’s wrong with her marriage to Portia De Rossi. In addition to that, most of the interviews that she’s giving are VERY personal and detailed, and seem more like an apology than a defense.

I’m of the firm belief that there’s never this much smoke without fire, and although Ellen and Portia might not be on the verge of breaking up like the tabloids are suggesting, I also don’t think everything’s as fine and dandy as Ellen’s making it out to be. Plus, don’t forget – although we’re hearing plenty from Ellen, there’s still nary a peep from Portia.

Really, why does Ellen care about these rumors? I mean, she’s used to speculation and rumors, and she’s used to tabloids. So why is she speaking up, and why now? Again, this whole thing seems more like a public apology than anything else, and she could be doing all this to appease Portia – either because their marriage really is on the rocks, or because Portia’s upset by the rumors. Ellen was seen last week with a mystery woman on a date… .

In the same issue of Closer Weekly, Rosie O’Donnell also discusses how losing weight ended up ‘saving her life‘. In addition to that, Simon Cowell opens up about the birth of his new baby boy, and Olivia Newton-John discusses her anticipated Las Vegas show.