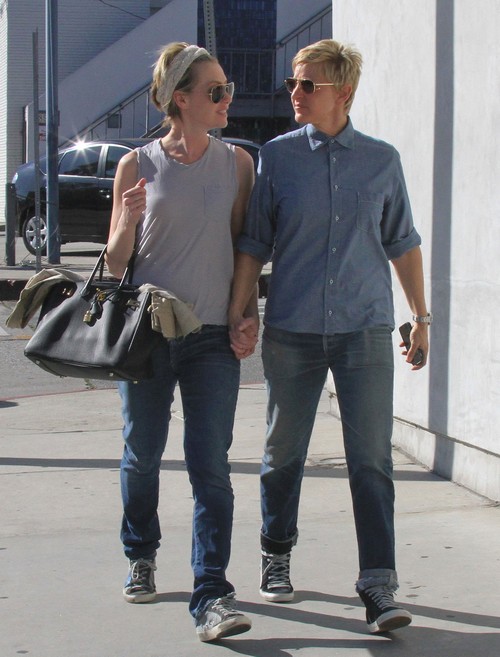 It wasn’t all that long ago that we were telling you guys about how Ellen DeGeneres had advised her good friend Jodie Foster not to get married to Alexandra Hedison. Ellen herself has been having serious marital problems with Portia de Rossi for the last several months and at first it seemed like a comment aimed at trying to protect her friend from suffering a similar fate.

Now we have to wonder though. Hedison actually dated Ellen for about 3 years and perhaps there are some residual feelings left over there. I have to question Ellen’s motives. Does she really genuinely dislike the idea of marriage now because of her own situation or was she hoping for another chance with Hedison eventually herself? She’s clearly not thrilled that the two swapped vows and it has caused her marriage to Portia to completely crumble.

Sources say that if a split hasn’t happened already then it is imminent. Portia has always been an insecure partner with a bundle of problems such as alcoholism and an eating disorder. Ellen helped her to stabilize but there are still a lot of daily issues to fight off. Hedison isn’t nearly as insecure and life with her was actually quite a bit easier. Perhaps Ellen realizes that Jodie’s life is a whole lot easier than her own and that she could have been in the same position if only she had hung in there. Instead Ellen is left with a train wreck and watching someone that she once thought was her better half go off and find love elsewhere might have been the catalyst to cause Ellen to pull the plug on her own marriage. Will Ellen and Portia make it? Tell us your thoughts in the comments below!