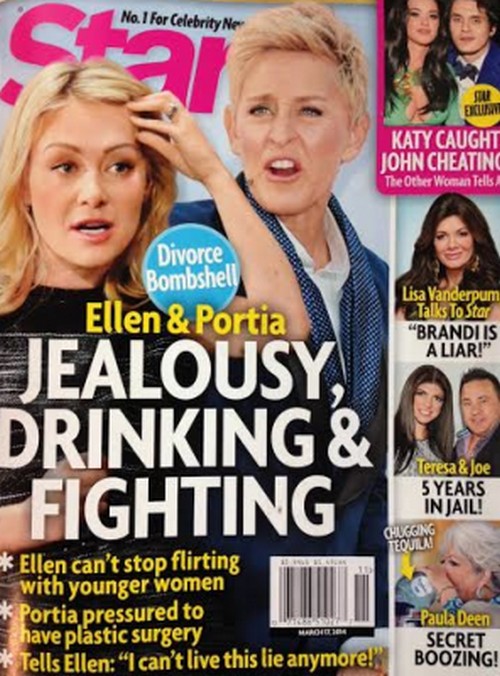 Ellen DeGeneres may have been a runaway hit on Oscar night but it seems that her home life isn’t as smooth. There have been rumors on and off for the last year that her marriage to Portia DeRossi is on shaky ground but recently they have really picked up speed. Usually these rumblings have a way of dying down but not this time. Instead we are hearing that things between the ladies are worse than ever. According to the March 17th print edition of Star magazine Portia is at the end of her rope and is threatening to leave the six year marriage.

Apparently Ellen has been hitting the bottle pretty hard after work and she’s not the nicest person when drunk. She also has a bit of a wandering eye and doesn’t really try to hide her love of younger women. The whole situation is causing Portia to become extremely jealous when she found out that Ellen has been out wining and dining someone while she was sitting at home with the dogs. Ellen has also kind of controlled what roles Portia has chosen in recent years when she does work and that isn’t sitting well either. Portia is missing her career too.

Did Katy Perry catch John Mayer cheating again? The two confirmed their split last week and according to the new issue of Star magazine there is most definitely a third party involved in this bust up. Katy might be the only one that thought things would end any differently. I don’t think there is a woman alive that John has been able to stay faithful to! Will Teresa and Joe Giudice see jail time after pleading guilty to several counts of their fraud indictment? Star has all of the latest on the couples’ case including the fact that Teresa is angling for house arrest. Should she see the inside of a prison cell instead? Tell us your thoughts in the comments below!