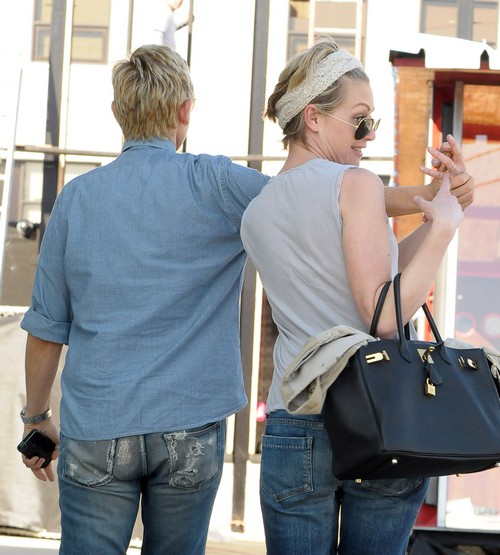 We have been hearing for months now that Portia de Rossi and Ellen DeGeneres‘ marriage has hit the skids in a big way. We have heard about epic fights and Portia fighting for freedom bit by bit. Apparently Ellen is very much the boss lady of their relationship and Portia has taken a more passive position, at least until recently. Now she wants the freedom to choose her work projects and things came to a head recently when Portia refused to attend a taping of Ellen’s show. She instead chose to walk their dogs, without her wedding ring.

Now we are hearing that Ellen realizes that her wife already has a foot out the door and is grasping at straws. She recently found a lump in her breast that in the end was nothing to worry about, but it ignited old fears. Ellen has lost several of the women in her family to breast cancer and she herself underwent a lumpectomy a few years ago. According the Feb. 24th print edition of National Enquirer Ellen panicked when she found the lump and Portia was totally attentive to her and her fears. She realized that as long as she focused on her gut level cancer fears then Portia won’t leave and so she is continuing to play that card.

Do you think that somehow these exaggerated fears will somehow make Portia remember why they got together in the first place and want to work it out? Or does she just feel obligated to stay while Ellen again manipulates her? Tell us your thoughts in the comments below!

Ellen and Portia use paparazzi set-up photos to try an dispel rumors of their impending break up – trying to look all lovey-dovey on their public Valentine’s Day walk – meanwhile Ellen’s wandering eye and Portia’s advancing age work against any long-term solidarity between the two.