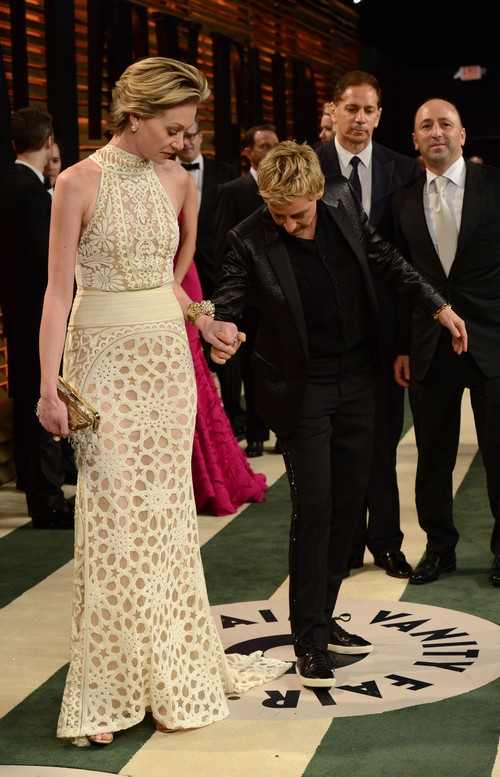 We have been hearing rumors of major problems in Ellen DeGeneres and Portia de Rossi’s marriage for quite some time now. Apparently Ellen’s back breaking workload causes her to unwind with quite a bit of booze which would be okay if Ellen was a fun drunk. Instead she allegedly gets pretty hostile and that is a situation that Portia no longer wants to deal with. She also is fed up with watching her wife of 5 years cozy up to other women in the name of work.

According to the March 31st print edition of National Enquirer, the ladies have finally conceded that they are locked in a pretty toxic relationship. Ellen and Portia have decided to do what many other struggling couples do and head for a marriage counselor. That sounds like a pretty smart idea considering how many issues these two have. Sources say that Ellen claims to want a real partner but then dictates what jobs Portia can take. On the flip side she then complains because she doesn’t want a housekeeper for a wife. Poor Portia is stuck in a catch 22 there and if Ellen doesn’t let go of control then she’ll stay stuck indefinitely or at least for as long as the relationship continues.

Do you think that this marriage is going to last or is the writing kind of on the wall? If they decide to split it could turn into a $220 million divorce! No wonder Ellen ran to therapy! No one wants to have that kind of hassle! What are your thoughts on Ellen and Portia’s marriage? Tell us in the comments below!