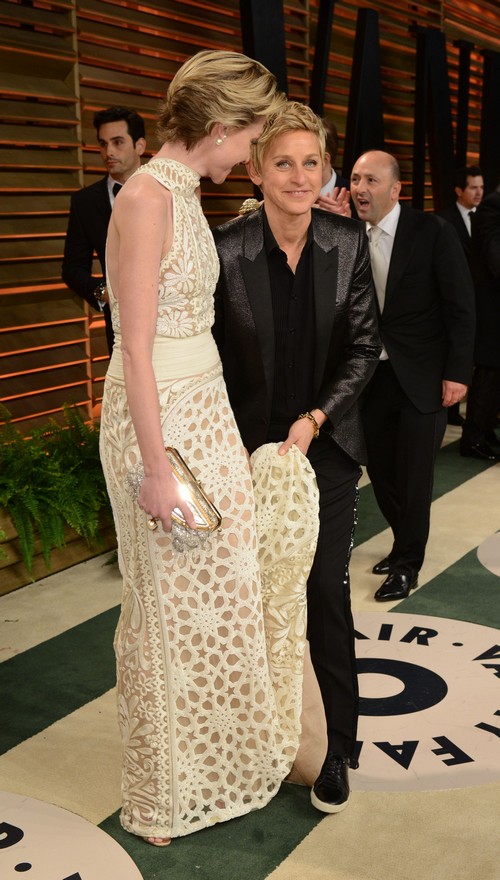 I guess all of those rumors about Ellen DeGeneres and Portia de Rossi’s marriage being in trouble are really starting to bother the talk show queen. Why do I think this? Well because after her hosting duties for the Oscars ended the couple made the party rounds and while doing so Ellen rarely let go of Portia. While she rarely mentions those rumors (ahem, People Mag…) the vice grip that she had on Portia all night read more like over compensation rather than anything motivated by love.

According to the March 17th print edition of Star magazine Ellen gushed about how they have the perfect marriage as Portia smiled a bit. That’s the thing, while Ellen is prone to brag about her version of happily ever after with Portia, her wife rarely does the same. Instead Portia appears to do as she is told or at least she has until recently. Lately the two have butted heads on many issues including Ellen’s flirting and heavy boozing.

Then there’s Portia’s career. It was once thriving but since becoming Ellen’s wife she has allowed her to choose what projects she’ll accept and the end result has been resentment. From the sounds of things Portia feels forever trapped under Ellen’s thumb even when it comes to work and it’s no longer the place where she wants to be. Do you think that a split is coming for these two? Will Portia find the strength to offer an ultimatum or end the relationship that is clearly not serving her well any more? Tell us your thoughts in the comments below!