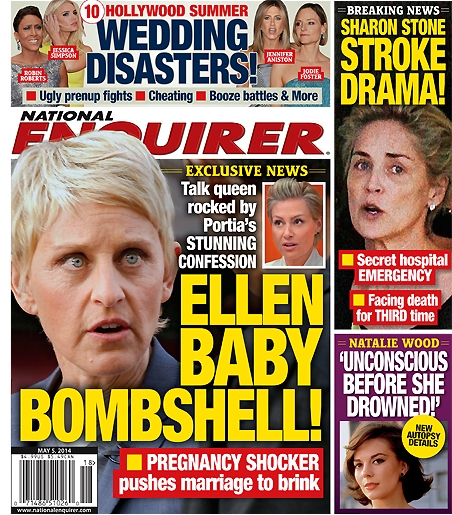 Ellen Degeneres and Portia de Rossi haven’t been having the smoothest ride lately, if the tabloids are to be believed According to recent reports, they’ve been fighting constantly and are on the verge of breaking up, even though neither one of them actually wants to get a divorce. And now, we have a new report that suggests that Portia is actually pregnant, which is apparently pushing the marriage further ‘to the brink’.

If anything, wouldn’t it be the other way around? Well, I guess not in this case, especially if the pregnancy was a ‘surprise’ for Ellen. Considering that Ellen and Portia wouldn’t be able to conceive by accident, if Portia is pregnant, then that means she probably cheated on Ellen with a guy. Then again, this whole story reeks of tabloid BS. I can buy Ellen and Portia having problems, but Portia being pregnant? I know the tabs are trying to push the whole Portia cheating storyline at us, but this is so far-fetched that it just ends up coming off as nonsensical. If Portia was actually pregnant – and that too, by another person – you think we wouldn’t have heard some inklings of it by now? In any case we certainly wish Portia all the best if she IS in fact pregnant!

Anyway, it’s the National Enquirer, so I wouldn’t buy into the story too much. After all, they also report that Sharon Stone has been secretly rushed to the hospital after dealing with another stroke. Again, it’s possible that the Enquirer just has some good tipsters at the hospital, but it’s more than likely that they’re just playing guesswork here – especially since if this was true, it would have been breaking news elsewhere.

Finally, new autopsy results suggest that Natalie Wood was unconscious before she drowned, which lends credence to the idea that she was murdered, not a victim of an accident. Now that we believe 100%. There is so much evidence that foul play was involved in Natalie’s death.

What do you guys think about this week’s Enquirer stories? Let us know your thoughts in the comments below.