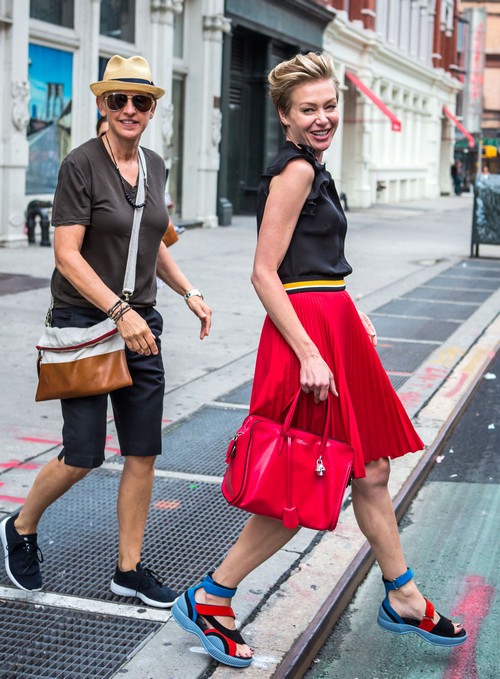 I guess pretty soon we’ll be able to add Ellen DeGeneres and Portia de Rossi to the list of couples who have desperately had a baby with the hopes of it salvaging an already failing relationship heading towards divorce. It seems that Portia’s 30 day stint in rehab back in May made both of these ladies think long and hard about what is necessary to try and save their marriage from divorce. According to the Aug. 4th print edition of In Touch magazine Portia has already contacted the Center for Surrogate Parenting in Encino, CA for information.

Ellen and Portia are doing the best they can to avoid a split and divorce. Ellen has reportedly given up drinking to support Portia’s rehab. Furthermore, Ellen used her clout in Hollywood to get Portia a role on the hit drama Scandal. Now all that’s left to stop the couple’s divorce is to give Portia a baby.

It’s no secret that before rehab Portia had been growing increasingly depressed over her marriage and also the fact that her life was boring at best. While Ellen went to work and schmoozed other women Portia was spending quality time with her dogs and it had turned into a lonely life. She decided that she wanted a baby in spite of originally agreeing to a childless marriage. Ellen’s reaction was initially pretty bad when faced with the idea but she too reevaluated things while Portia was away.

Both Ellen and Portia have decided to go ahead and have what is commonly referred to as a “band aid” baby, meaning the couple hopes that a child will bring them closer together. The fact is, this rarely works and instead they are left with some heavy duty responsibility when the inevitable split happens. Hell, it looks like Beyonce and Jay Z also made this mistake and while the birth of Blue Ivy bought them time, it fixed nothing.

Do you think that Ellen and Portia are already in the process of finding a surrogate? If so, is there any chance that a baby might somehow help them? Tell us your thoughts in the comments below!