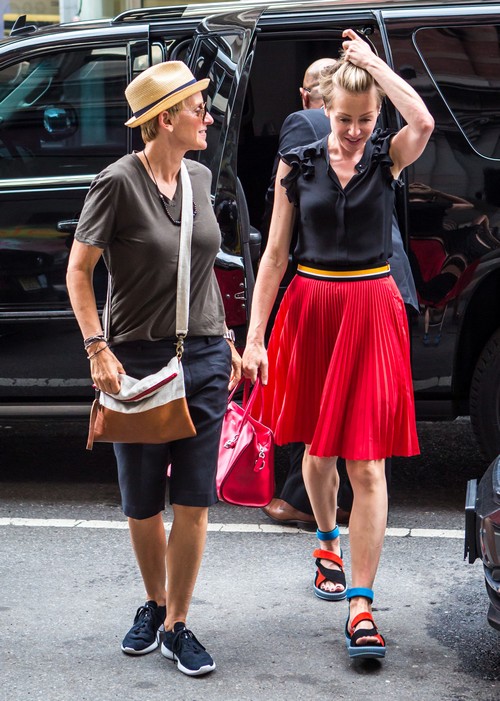 Ellen DeGeneres and Portia de Rossi have had their fair share of trouble recently that came along with a bunch of divorce and cheating rumors plus Portia’s rehab visit a few months ago. However, in the midst of Portia’s downward spiral, a new report suggests that Ellen is dropping everything to support her wife in her time of need. That ‘everything’ also includes alcohol, with Ellen reportedly cutting out booze completely to help Portia get sober again.

Portia has struggled with major health issues in the past, especially during the early 2000s when she dealt with an eating disorder and dropped down to 80-something pounds. Although she spent years recovering from that, her propensity for addiction and low tolerance for stress seems to have hastened her over dependence on alcohol. According to recent reports, Portia was binge drinking for a few months after her marriage to Ellen hit an unhappy snag. Portia’s insecurity and jealousy,  reportedly led to most of those fights, with Portia jealous of Ellen’s skyrocketing career while her own had stagnated.

As such, she and Ellen hit a rough patch around the same time, and Portia turned to alcohol to deal with the problems. Lucky for her, people close to her realized what was happening in time and admitted her to rehab a few months ago. Portia reportedly spent only 30 days in rehab, but Ellen has been incredibly supportive of her since she got back. She’s been helping Portia get back on track, and that includes no booze, no parties, no drugs, and nothing that could cause Portia to lose her sobriety.

In other words, Ellen and Portia are doing everything in their power to avoid a divorce. It’s commendable, really, that a Hollywood couple is trying this hard to avoid divorce, especially since most of them treat it as an inevitability, not a choice.