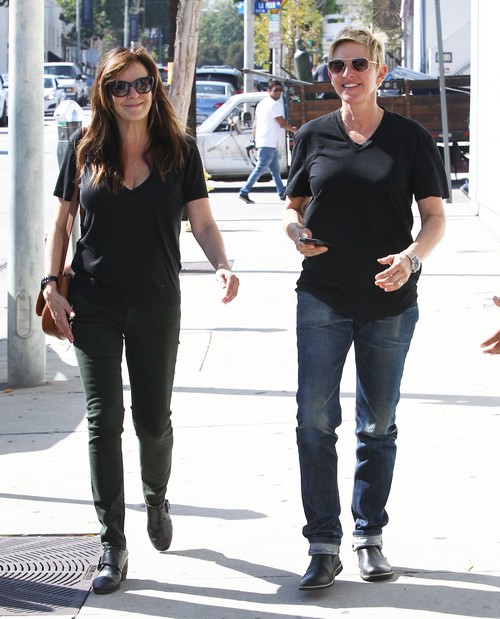 Slowly but surely all of the pieces to the meltdown of Portia de Rossi are beginning to fall into place. We already knew that her marriage to Ellen DeGeneres has been rocky for the last several months – there have been literally hundreds of articles highlighting their potential divorce – and that the two women seem to have reached an impasse over having a child. Ellen is totally against it and married Portia with the understanding that kids are not an option so she reportedly has felt betrayed by her wifey now wanting to go back on this deal. Meanwhile, Portia is tired of sitting at home with the dogs while her wife leads an active life, mostly without her. Since Ellen rarely allows her to work, a baby would have given her something to care for while Ellen gallivants.

When the crap hit the fan and divorce became a serious possibility Portia started hitting the bottle hard as she used to do and apparently began popping pills as well. Things were reportedly getting pretty bad between the couple but according to Radar Online all hell broke loose when Ellen was caught cheating with a mutual friend. That deception is part of what totally unhinged Portia. The fights were ugly and epic, with Portia even videotaping Ellen at her worst, with the threat to show the world how she really is. Of course Ellen grabbed the footage and shuffled her wife into rehab- a move that also gave her time to cover her own tracks.

Portia’s been home for a few weeks but the relationship is still broken. It’s a mystery how Portia will even begin to trust Ellen now, especially when she is alleged to wine and dine other women. Now that Portia knows that her wife will cross that line well it’s really not looking good for these two. Do you think that Portia will be able to forgive Ellen for alleged cheating and stay in the marriage? Or is this union over and done with? Tell us your thoughts in the comments below!