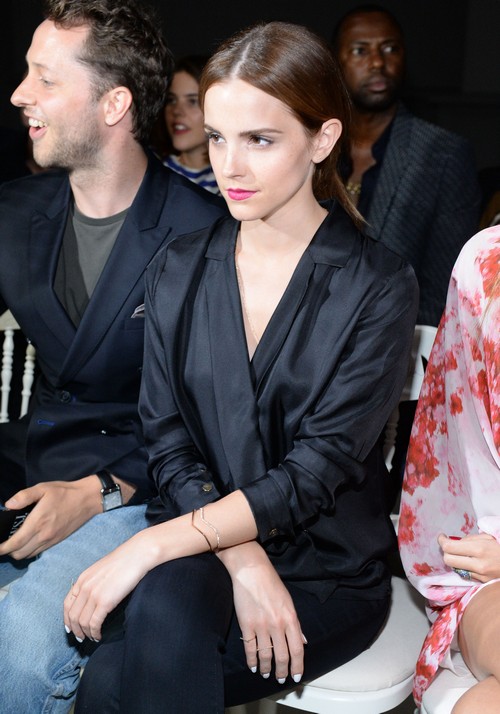 Right now, Angelina Jolie is Hollywood’s favorite philanthropist. She’s the epitome of a humanitarian movie star, but is Angelina worried about someone encroaching on that space? Emma Watson has just been appointed as Goodwill Ambassador to the United Nations, a post also held by Angelina in the past.

The Executive Director of UN Women has released a statement about Emma’s appointment, explaining, “We are thrilled and honored to work with Emma, whom we believe embodies the values of UN Women. The engagement of young people is critical for the advancement of gender equality in the 21st century, and I am convinced that Emma’s intellect and passion will enable UN Women’s messages to reach the hearts and minds of young people globally.”

Angelina and Emma do have quite a bit in common, even including their features and aesthetic appeal. Both of them are slim and dark-haired women, and they both have quite sharp facial features. They’re both incredibly talented and well spoken, and they both care a lot about the environment and women’s issues. Both have a huge fan following, although I’d wager to guess that Angelina’s is bigger because of her movie star status. Emma is obviously much younger than Angelina and is only just starting to spread her wings in Hollywood. Even if she never wins an Oscar like Angelina, her humanitarian efforts could well match up to what Angelina’s managed to achieve in the past decade. After all, Emma’s only 24 years old, and Angelina still hadn’t gotten her shit together at the age of 24.

So yes, when we hear about Angelina being jealous of Emma – or rather, ‘wary’ of Emma – we don’t disregard it completely. But at the same time, I have a hard time believing that Angelina even cares. If anything, she’d be happy that another celebrity is using their power for women’s rights, right? Plus, the tabloids are always making it seem like Angelina hates any celebrity who does charity, when the opposite is usually true.

With the weight of the world on her young shoulders Emma Watson still finds time for Paris Fashion week… see below at the Giambattista Valli show on July 7, 2014 in Paris, France.