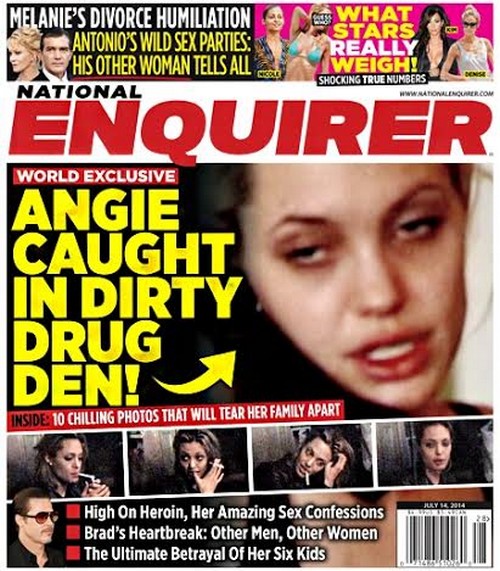 It’s really no secret that Angelina Jolie was one heck of a wild child back in the 90’s. She really seemed to kind of like the fact that people thought she lived dangerously and we all knew that she was knee deep in drugs, sex and self harm. Now it seems that a voice from Angie’s past has come forward not just with a story to tell but also with a 16 minute video that will likely make Brad Pitt think twice about racing down the aisle. Especially since Angie raves about how massively well endowed Billy Bob Thornton is. According to the July 14th print edition of National Enquirer Franklin Meyer was Angie’s drug dealer back in the 90’s and he even made special trips to the upper west side to her apartment in the Ansonia Hotel.

It was there that Meyer shot the video of Angie, high on heroin confessing the dirty details of her crazy sex life. Meyer has apparently held on to this tape until he felt the time was right to remind the world exactly who Angie used to be. In recent years she has worked hard to put on a show of being a humanitarian mom that borders on angelic. That is the woman that Brad fell in love with and rumor has it that if Meyer ever finds the right buyer for the video footage it’s likely to make Brad question everything about Angie and whether or not he even knows the real her.

Speaking of humiliation, apparently Melanie Griffith is dealing with her share. Now that she has officially filed for divorce from Antonio Banderas the truth seems to be spilling out a whole lot faster than she can deal with it. According to the National Enquirer one of Antonio’s side chicks has started talking and she is giving up details about the actors sex parties with a multitude of other women. While Melanie tried to keep things together for the family she now realizes that she looks like an idiot for putting up with Antonio’s lies. Do you think divorce court is going to get ugly for these two? Tell us your thoughts in the comments below!