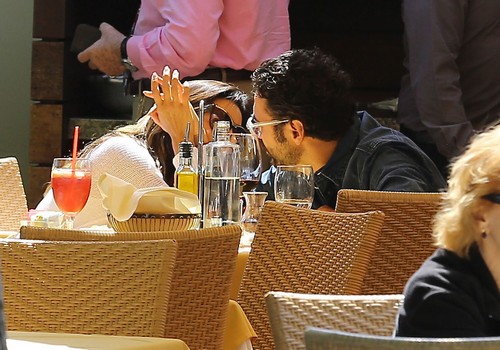 CDL has learned exclusively from sources close to the situation that Eva Longoria and Jose Antonio Baston are engaged to be married. Kim Kardashian isn’t the only woman in Hollywood with two failed marriages. Eva Longoria also has been through two divorces and she is currently on the prowl for not just a great man but a baby daddy. As CDL first reported exclusively, the former Desperate Housewives’ star has been quietly dating Mexican Media company mogul Jose Antonio Baston since last October and she has decided that this is the man for her.

According to the June 2nd print edition of National Enquirer Eva is pulling out all of the stops to convince 46-year old Baston that she is the perfect woman for him. At 39 Eva’s biological clock seems to really be ticking and she knows that it is getting down to the wire to star a family. In order to win Baston over she has undergone a complete makeover and dumped a load of cash on a new, classy wardrobe. Eva also knows that food is often the way to a man’s heart and so she has been putting her gourmet skills to good use in the kitchen.

Eva seems to rush in to every relationship doesn’t she? She is one of those celebs that clearly dates for the sole purpose of finding a husband. Everything always seems to turn super serious until it falls apart. Do you think that Baston really is the guy for her or will this be another crash and burn kind of romance for Eva? Are babies in her near future or will her career ultimately heat up again and take over instead? Tell us your thoughts in the comments below!

Former “Desperate Housewives” star Eva Longoria and her boyfriend Jose Antonio Baston out to dinner in Malibu, California on May 23, 2014. Eva recently spoke about Jose saying, “He’s a good dresser,” Longoria, 39, said of Baston, 45, president of Televisa, Latin America’s largest media company, and the world’s largest Spanish-speaking media conglomerate. “I always have to step it up. It’s exhausting.”