American Horror Story Spoilers: Did Evan Peters Save Emma Roberts From Being Fired by Ryan Murphy? 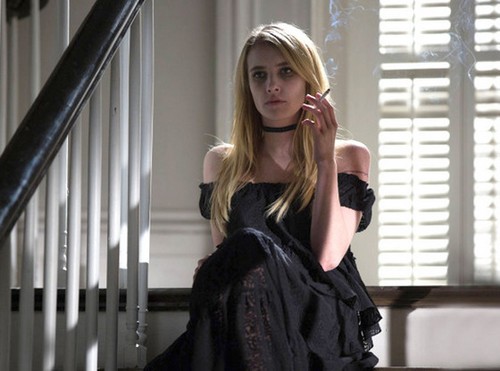 Meet Evan Peters and Emma Roberts, the world’s most volatile Young Hollywood couple. Even though Emma reportedly whacked the crap out of him, Evan went ahead and proposed to her. And according to recent reports, he also stood up for her with American Horror Story producers, and managed to convince them to bring her back for this next season of the popular show.

Reports claim that Emma was on the verge of being fired from the show because she didn’t get along with co-stars Gabourey Sidibe and Jessica Lange. Apparently, executive producer Ryan Murphy was debating on whether to fire Emma when Evan came to his fiance’s rescue.

Sources explain, “Ryan loved her acting but wanted to keep harmony on the set. Evan then assured the boss he can keep her in check.”

Well, Evan clearly didn’t do a good enough job of convincing Ryan because Emma’s still not a confirmed cast member for Season 4. Even though her name has been announced in conjunction with the cast, she’s still reportedly in negotiations to star in this next season. So while Evan might have ‘convinced’ Ryan Murphy to re-hire her, it looks like Ryan’s still hedging his bets.

Regardless, the National Enquirer claims that Evan and Emma are desperate to work together again, and if they don’t manage to do it on American Horror Story, they’ll do it on another project. And let’s hope that whatever they do end up collaborating on, it doesn’t involve fighting. Wouldn’t want art to mirror life, would we?

What do you guys think? Was Emma ever in danger of being fired from the show? And did Evan save her job? Let us know your thoughts in the comments below.