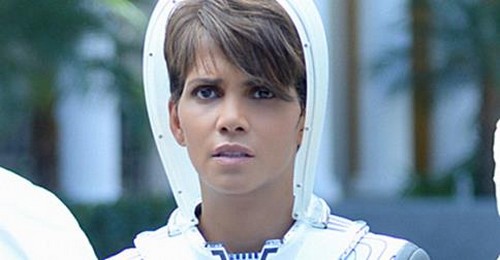 Tonight on CBS Steven Spielberg’s Extant starring Halle Berry returns with an all new Wednesday September 17, Season 2 finale called, “Ascension.” On tonight’s episode season 1 ends with Molly returning to space to redirect the Seraphim away from Earth and protect the world from the deadly spores. Meanwhile, John discovers that Odin’s plan puts Ethan in danger.

On last week’s episode When Molly finally came face-to-face with her offspring, she realized she may be the only one who could stop the coming danger. Meanwhile, Julie uncovered grave secrets about Odin.  More happened!  If you missed the episode we have a full and detailed recap, right here for you.

On tonight’s episode Molly returns to space in an attempt redirect the Seraphim away from Earth and protect the world’s population from the deadly spores. Also, John discovers that Odin’s plan has put Ethan in terrible danger, on the season finale

When Molly returned to her family she had a lot of explaining to do. She had yelled at Ethan for trying to intervene between her and her other son. And Ethan is smart enough to realize that she cared for the other boy more than she cared about him. It was a slip on her part but he instantly picked up on it.

Molly and John want to make everything better for him and they can’t. John has to be the one to worry about the possible bomb lying in wait inside of Ethan and Molly is preparing to go into space. ISEA crafted an emergency mission to deal with the Seraphim. They knows about the evil spores heading to earth and she’s their last chance at preventing an alien invasion. In order to save the world – motherhood had to be put on hold.

And that goes for the other child as well. She knows her other son is going to do everything he can to see the ship crash so for now – she’s voluntarily working against him.

When Molly does make it to the Seraphim, she quickly found Glass. And he told her all about the real Katie. His Katie died a while ago and the thing running onboard with her face is something else. Something he doesn’t know about but she does. She tells him that they have to save the ship from crashing to earth. She explained like this – if the ship crashes then the thing that tore its way out of Katie will start doing that to everyone it encounters back on their home planet.

Though things take a turn for the worse onboard the ship. Glass can’t tell the difference between what’s real and what’s the spores. “Katie” was able to change her face into Molly’s and confuse him. Meanwhile the offspring running around on Earth broke into ISEA’s headquarters. He wanted to stop all ground support Molly might be using and her people luckily had an emergency fall back plan. They quickly evacuated the building and locked him in one of their stairwells.

Glass, while under the influence, sabotaged Molly and because there’s no human on earth that could resist the offspring’s “persuasion” – John and Ethan came up with their own plan. After some investigation, John was able to locate the bomb hidden inside Ethan. But before he could remove it he had to win back Ethan’s trust.

Odin had made Ethan believe his parents were going to shut him down. So with those kind of fears preying on his mind it took everything John had to convince his son that he is loved.

So later, after everything was fixed and the bomb was removed, Ethan assured John that he could enter the building without being affected by the offspring. And he was right. He made it passed the offspring and he was able to help his mother. She had set the main ship on a timer to explode but her computer back-up Ben wasn’t allowing her to disengage her own ship. He thought she had been too exposed to contamination and counted her as risk.

Hence Molly and Glass were going to die. Though, thankfully, Ethan managed to override Ben’s system. But to do that he had to raise his body’s temperature to a human’s level and he also had to sustain holding that much heat until the override went through.

Ethan’s parents warned him not do it. They knew his body wasn’t mean to hold that much and yet he couldn’t listen. Because if he had listened then he would then have to accept losing his mom. And that was something he couldn’t face.

So he ignored them and override the system. By time he had finished, the offspring had already found him. And so as courtesy to his mom – he warned the offspring to run just as his system began to react to being overheated.

Ethan exploded but in his final moments he saved his mother, Glass, and the offspring. His “brother” went on to be found by some pretty good people – not that the offspring will care about that once it kills them. And in the end Molly mourned the son that saved her life rather than the one that’s still out there. She finally sees what the offspring is and she knows she doesn’t want anything to do with him.

And though Ethan’s body is gone – his mind is everywhere. John had backed up his mainframe online and that has allowed Ethan to live on despite not having a body. So Molly still has a family. Maybe not the one she always expected but a family nonethless.