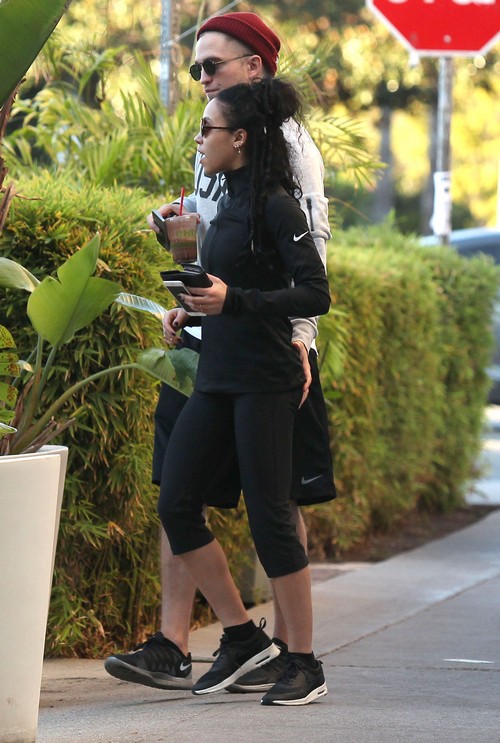 FKA Twigs and Robert Pattinson seem to have a good thing going between them, but Kristen Stewart knows a hypocrite when she sees and hears one! In her latest interview nonsense FKA Twigs claims she doesn’t really care for the paparazzi taking her pictures when she and Rob are together. FKA Twigs has been placed in the spotlight courtesy of their relationship and she claims she loves him, but perhaps not everything that comes along with dating someone so famous.

While he dated Kristen Stewart, it was a completely different story. They were both catapulted to insta-fame as a result of the “Twilight” movies. With Twigs, she is rapidly becoming a household name only as a result of her personal life – and now she thinks she’s too good for it?!? Of course FKA Twigs is the same girlfriend who dared to tell Rolling Stone that she doesn’t want to be famous!

In a new interview, Twigs said, “That side of my life [with the paparazzi has] nothing to do with me. That’s, like…That is the…side of life of the man that I love. And…when that started happening I had to…because that is the opposite of who I am as a person, and it was weird.”

She went on to say, “Then I had to sit back and have a conversation with myself and I had to say: that is something really horrible. No, not horrible, I don’t find it horrible, it’s something that’s very challenging. I look uncomfortable because I am uncomfortable. But then it’s, like, is this person in my life worth that? And he is, without question. Do you know what I mean? In comparison to how happy I am. And how I feel with him. It’s 100 percent worth it.“

Even still, she has suffered some racism as the result of her relationship with the British actor. She said, “Obviously I know if you’re putting yourself out there, saying, ‘Hey! Listen to my music!’ with pictures of yourself in the magazines, then people are going to judge you. ‘I hate her music. I hate her hair. I hate her production. I hate her videos.’ Fine, don’t care. That’s the great thing about art, it’s not for everyone. But when it comes to racism, really? In this day and agee? Pick that?”

Apparently, she is snubbing her nose at the fame that her personal life has brought her. She said, “I think it’s easy to sit in this trendy cafe, in a trendy little area of New York and say, ‘Ooh, I’m FKA Twigs.’ But outside of these four blocks, does anybody really give a s**t? Probably not. I’m well aware if I walk down one street in New York, I’ll hear people say, ‘Oh my gad!’ And if I walk down another street: nothing. And those streets are blocks apart from each other.”

She added, “I’m at a stage where I want to find things really difficult. Because now, at this point in my career – it’s maybe where some artists sit back on their laurels. Sit back and believe the hype when you haven’t actually done anything yet.”

Is FKA Twigs famewhoring this up due to her relationship with Robert Pattinson or is she overly modest? What do you think? Does Kristen Stewart believe a word that comes out of Rob’s new girlfriend’s mouth?