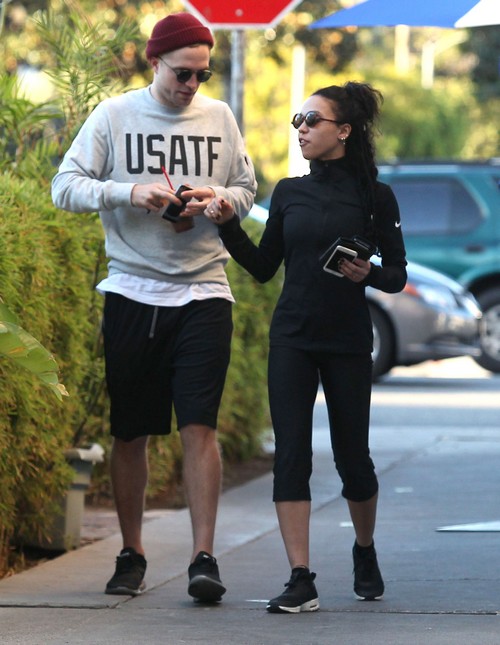 Infidelity in a relationship can result in more than a breakup.  Feelings of insecurity, lack of trust, and crushed confidence, can all come along with the territory and no one knows that more than Robert Pattinson after now-ex Kristen Stewart cheated on him with director Rupert Sanders—damaging the Twilight star’s self-esteem.

Robert’s damaged ego has left his current girlfriend, British singer FKA Twigs, with a sort-of slab of clay to mold into her idea of a perfect boyfriend. Because Robert feels a bit lost after losing the comfort of a years-long romance with easy-going Kristen, he is taking in the suggestions girlfriend FKA Twigs, real name Tahliah Barnett, is happily giving him.

Kristen and Robert were together so long that the passion they had in the beginning was long gone. That passion was fueled by the couple co-starring in the Twilight series. Beyond that, Kristen didn’t get much from Robert, who is the epitome of poor health, in the bedroom. Pattinson drinks to excess and smokes heavily. Relying solely on his sexy persona from the popular saga, Pattinson was never known as being a beast in the bedroom. In fact, the only beast was likely his breath after a night of partying. He and Kristen Stewart had a boring routine, which prompted her to stray with a man willing and able to provide a little sexy teasing and sober foreplay.

Not only was Kristen used to her mundane life with Robert, his friends and family were quite familiar with his pattern of partying in excess, smoking, eating heavy foods, and sleeping for hours and hours. All of that has changed now, however, as Pattinson’s new lady is demanding he exercise, east right, and build up that stamina in the love-making department.  FKA Twigs is used to uber-sexy, built, musicians and dancers who know how to steam things up in the bedroom and Robert just doesn’t fit the bill. She has been disappointed time and time again and is sure his lack of ability and endurance in the bedroom is a result of his lifestyle. Now, Pattinson is regularly lifting weights, has cut his hair, is eating healthier foods, and is even drinking low-calorie spirits says OK Magazine. While he is trying to latch on to this new identity, he is still partying in excess as he tries to keep up with the fast crowd he is keeping. FKA Twigs is basically the complete opposite of Kristen in almost every way and Robert Pattinson is determined to be whoever she wants him to be so he can hold on to her.

Hoping to change her bedroom dud into a stud, Twigs is throwing compliments at Pattinson to keep him motivated enough to keep up with the his new, healthier lifestyle.  Pattinson is finding out that being a hunk from Twilight is just not enough anymore and he needs to actually put some work in to hang on to this lady! While he is feeling more confident about his looks, his self-esteem is still taking a beating because he feels that he isn’t even close to them manly men his girlfriend has had in the past and knows that her suggestions are based on wanting him to be more like the sexy men she’s used to.

While friends and family hate to see him going through this, Pattinson is blinded by his love for FKA Twigs and has no plans on making any changes—unless Sergeant Twigs says so!

What do you think about Robert’s new look and lifestyle, CDLers?