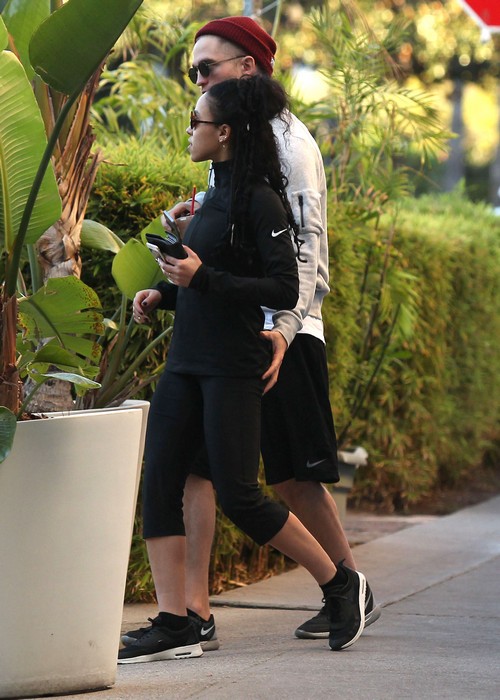 You know the saying, ‘hindsight is always 20/20’? Well, Kristen Stewart’s hindsight is probably 30/20. Not only did Kristen date Robert Pattinson in the Twilight Rpatz days but Kristen cheated on Robert Pattinson, had to apologize to the whole world about it, and then lived to face down the humiliation. However, I have a feeling that Kristen laughs now and is getting some well-served revenge in the form of seeing Rob humiliate himself all over his new girlfriend, FKA Twigs.

Let’s be real – Rob isn’t doing himself any favors by hanging out with FKA Twigs, especially not with their constant PDA. Holding hands and making out is one thing, but grabbing butts in public? Knowing full well that the paparazzi are watching and taking photographs? Either Robert Pattinson is the most gullible fool on the planet, or he and FKA Twigs have a mutual-benefit thing worked out: Rob acts like a pussy-whipped boyfriend, and FKA Twigs gets her fame and fortune.

Now, I wouldn’t put it past any of Rob’s friends to intervene and tell him that he’s acting like a fool. However, since absolutely none of them are doing that, let’s hope Kristen Stewart steps in and tries to help him out, at least for old time’s sake. I mean, all this ass grabbing just makes Rob’s PR worse because a) he looks stoned, b) he looks crude, c) his behavior resembles that of Justin Bieber, d) it’s disrespectful to women, or at least, many of his fan base will view it that way, and e) it’s not exactly the behavior of someone who producers and big executives want to work with.

Basically, Robert Pattinson’s now become FKA Twigs’ bitch, and she’s obviously not going to stop this behavior. For all her whining about how she doesn’t want to become famous, she sure doesn’t mind to get photographed with Rob every chance she gets, huh?

What do you guys think? Will FKA Twigs’ famewhoring behavior stop, or will Rob finally grow a pair and tell her to shove it? Let us know your thoughts in the comments below.