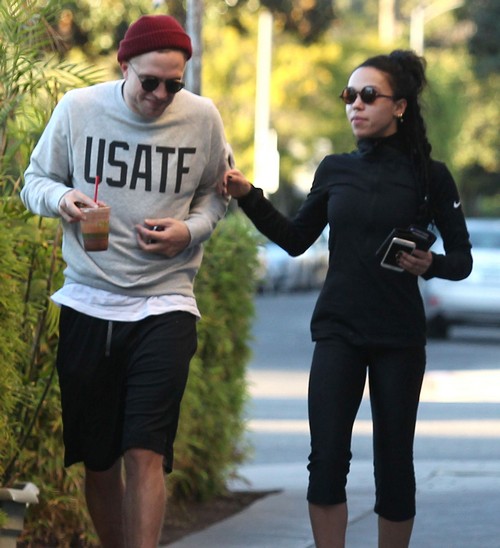 Twilight star Robert Pattinson is obsessed with his new girlfriend Tahliah Barnett, a British musician who also goes by the name FKA Twigs. Rob and Tahliah Barnett’s whirlwind romance has a lot of fans scratching their heads, even his ex-girlfriend Kristen Stewart who is worried there might be a marriage in the offing. In a matter of months Rob has basically put his career on hold to follow Tahliah on tour, convinced her to move in to his Hollywood home, and is even discussing marriage with her.

According to the latest edition of OK! Magazine, FKA Twigs has basically cast a spell on Robert Pattinson, and the Twilight star is obsessed with the singer – to the point that his friends are becoming concerned. An insider revealed to OK! that, “Rob’s gone completely overboard. He calls her and talks about her [Tahliah] constantly. His friends think it’s a bit much and they’ve been trying to talk some sense into him, but he can’t stop. In fact, it seems Twigs is responsible for the actor’s bizarre new ‘do. She casually mentioned that she liked guys with mohawks, and before she could blink he had shaved part of his head. She loves that he’s willing to change his style to her preferences. It’s almost as if she’s cast a spell on him!”

Of course Tahliah likes that Rob is completely changing his life and appearance for her, since the couple went public with their relationship her music career has begun to soar. If we’ve learned one thing about Robert Pattinson over the years, it’s that when he falls in love – he falls hard. His obsession with Tahliah is only a recipe for disaster. What do you think about Rob and FKA Twigs? Do you think that he is just going to wind up hurt, or his obsession with his new girlfriend is cute? Will RPatz get burned by Twigs like he did by Kristen Stewart? Let us know what you think in the comments below!