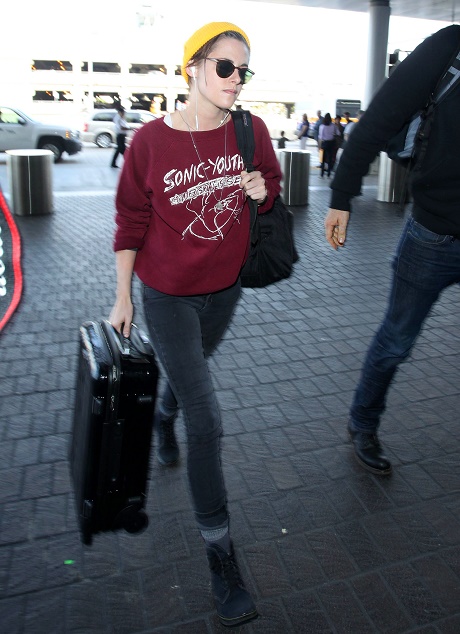 Kristen Stewart had a very publicized nip slip this weekend at the Hollywood Film Awards, one that most people claim was not an accident. To be fair, most Hollywood nip slips and underwear flashes seem like accidents, but are actually calculated shots created to maximize publicity – especially before a movie is coming out.

Kristen Stewart’s nip slip came while Robert Pattinson was in the audience, on the heels of her recently announced Oscar campaign for Still Alice. However, the biggest obstacle in this story is FKA Twigs, Robert Pattinson’s current girlfriend. FKA knows that Kristen Stewart wants Robert Pattinson back, and she’s obviously not happy about it. More than simple jealousy or insecurity, FKA Twigs realizes that career-wise, she still needs Rob – and Kristen doesn’t.

If FKA Twigs has a wardrobe malfunction on the stage? Not that many people will care, except in relation to Robert Pattinson’s reaction to the nip slip. But when Kristen has it? Well, it’s making headlines, creating controversies, and helping her buzz for Oscar season. Plus, there’s also the simple fact that FKA Twigs needs Robert Pattinson for her career, but Kristen Stewart doesn’t. So of course FKA Twigs ain’t happy about Kristen ‘accidentally’ flashing Rob in the audience.

Anyway, sources tell us FKA Twigs is still pretty furious about the whole nip slip situation, and she wants to get back to touring as soon as possible. I’m not sure how much that will help, but at least Rob won’t be around Kristen anymore. FKA Twigs will have to come up with a more fool-proof plan soon enough though, because Robert Pattinson and Kristen Stewart are bound to run into each other [in full view of the press] more often than not during this awards season, and FKA Twigs won’t be able to wrangle Rob away from all the parties.