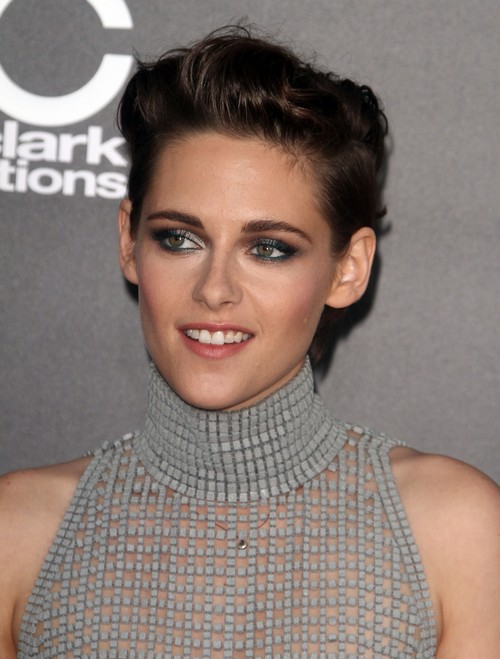 Kristen Stewart’s nip slip at the Hollywood Film Awards was intentional and directed at Robert Pattinson and improving her career via a rebranding effort. Kristen Stewart had a very strategic nip slip on stage at the Hollywood Awards this weekend, where her interior blouse just happened to inch down to reveal her breasts while she was presenting. It wasn’t as scandalous as most nip slips, since she was wearing a crocheted metallic top over another layer inside, but you could still see her breasts if you paused and saw through the outer layer.

Now, this world is clearly full of pervs because all the headlines this weekend were over ‘Kristen Stewart’s nip slip’ ZOMG. Obviously, many of Kristen’s personal fans are scandalized, but still others are wondering about the timing and location of this particular nip slip. Kristen’s usually very careful about that kind of stuff, isn’t she? And this time, she just *happens* to let her blouse drop? WHILE Robert Pattinson is in the audience? Yeah, not buying it.

Now, some fans are speculating that Kristen Stewart orchestrated her nip slip for her beloved Robert Pattinson [hi Twi-hards], but most of the others are wondering whether she did it for a little media and industry traction. Even though she was supposedly getting Oscar buzz for her role in Still Alice, Kristen is still being passed over for most of the major roles in Hollywood, including several blockbusters and high-profile indie films. Clearly, the industry hasn’t forgiven her little snafu with her married director a few years ago, and they’re not able to stop type casting her as Bella Swan. And what better way to shake up that image than have a wardrobe malfunction right in front of all the industry bigwigs?

What do you guys think? Could Kristen Stewart have orchestrated her own wardrobe oopsie? Or was it all an accident, Robert Pattinson or no Robert Pattinson? Let us know your thoughts in the comments below.