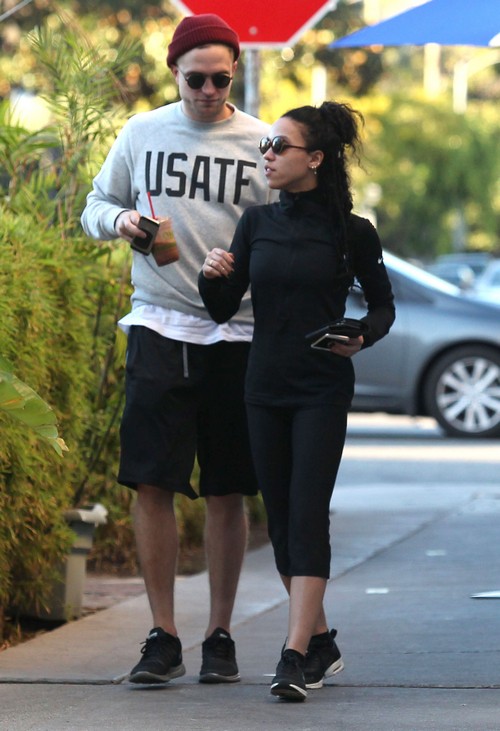 FKA Twigs is continuing to ride the Robert Pattinson fame to endless fame and fortune, and nobody’s stopping her. In a recent interview with The Guardian’s Observer, FKA Twigs talks about Robert Pattinson [duh] and how much he means to her. Of course she does. Meanwhile we have to ask – how can Kristen Stewart not hate FKA Twigs since the singer is so plainly taking every opportunity to use Rob to further her career. Is FKA Twigs starting to remind you of Selena Gomez every time she releases a song?

Twigs explains, “That side of my life [with the paparazzi has] nothing to do with me. That’s, like… That is the… side of life of the man that I love.” Well played, not mentioning Rob’s name directly. Of course everybody knows who she’s talking about, but by not saying his name, she comes off as though she’s trying to protect his privacy. #BitchPlease. The ONLY reason that people even know who FKA Twigs is because she’s dating Robert Pattinson. Her music was considered alternative and indie before she started dating Rob, and now she’s getting interviews with the Guardian and Rolling Stone Magazine. It’s not a coincidence that her music started gaining more followers as her romantic life started to hit the tabloids, and it’s definitely NOT a coincidence that she and Rob are constantly featured holding hands or grabbing each other’s butts.

On the one hand, Robert Pattinson knows what’s happening, so he’s not some clueless bimbo being used for his fame. He knows FKA Twigs is using him for her career, and he seems to be alright with it. Perhaps because his own career is slowly sinking down the toilet, or perhaps because he just doesn’t care – either way, Robert Pattinson seems fine being FKA Twigs’ unofficial PR person, even if the job doesn’t pay with anything but tabloid features [and probably good sex].