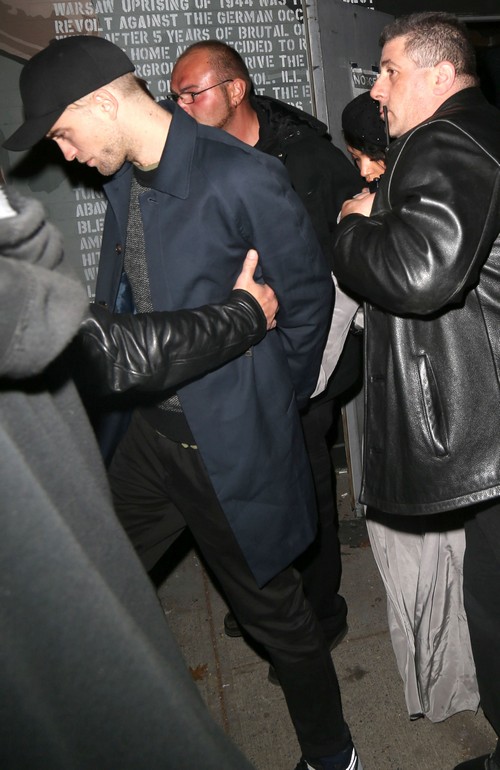 Robert Pattinson’s latest movie Idol Eyes was cancelled due to lack of finance, which has resulted in Rob partying constantly and accompanying his girlfriend, FKA Twigs, to all of her concerts. In fact, Robert Pattinson and FKA Twigs have clearly become inseparable, since the paparazzi are now getting pictures of them everywhere. At the mall, on the street, at bars, at concerts, etc. The two were most recently spotted coming out of Miss Lily’s 7A Rum Bar on Monday night, after celebrating FKA’s successful show in Brooklyn.

So basically, Robert Pattinson and FKA Twigs have been partying a lot. Some would say too much. We’ve already covered the idea of Rob putting his own career on the back burner to follow FKA Twigs around the country, especially since he should be trying to land more jobs right now. His career may have improved significantly post-Twilight, but that doesn’t mean he’s a household name anymore. If his name couldn’t guarantee financing for an independent movie, then he literally only has his collaborations with David Cronenberg as his industry calling card. So instead of focusing on auditioning and trying to land more gigs, he’s running around NYC with FKA?

Plus, there were rumors a while back that Rob was getting into some unhealthy partying, and hanging with FKA Twigs would hardly improve that. She’s a rocker chick, and while I don’t want to lump all musicians into one category, these two seem to have similar tastes when it comes to partying and going out. And that’s not necessarily a good thing, especially if FKA proves to be a negative influence on Rob.