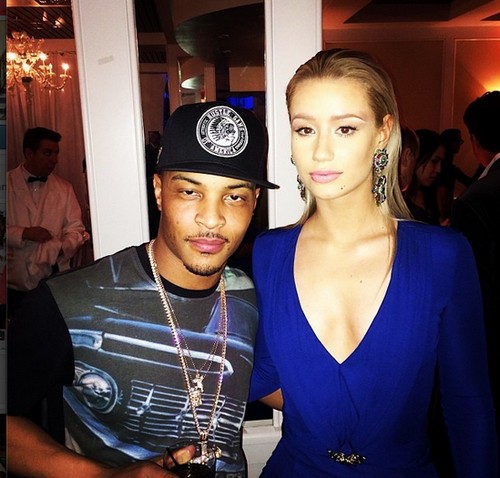 We have been hearing for awhile now that things have gotten a bit messy between T.I. And his wife, Tameka “Tiny” Cottle. The rumor mill has been cranking out reports of a split for the last few months and T.I. Certainly didn’t slow down the talk when he made a public spectacle of buying a new bachelor pad away from his family home. With all the talk of him playing around on Tiny and doubling back to cover his tracks I guess maybe it never occurred to him that Tiny might not be sitting at home waiting for him to come to his senses.

Instead Tiny was in Vegas this weekend and posted some photos of herself with Floyd Mayweather’s daughter. Floyd supposedly is friends with the couple, or at least he was until last night when security had to break up a fight between T.I. And himself. According to TM T.I. Didn’t like the pics that Tiny was posting and something gave him the idea that Floyd was trying to bang his wife, so T.I. Confronted him at Fatburger on the Vegas strip.

Punches flew when Floyd told T.I. To “control your bitch” and the scene turned into mass chaos. Floyd has since insisted that he wasn’t attempting to hook up with Tiny and that he had believed that he was a friend of the couple, plain and simple. Maybe it was Tiny initiating something with Floyd to make T.I. jealous and if so, it certainly worked! The real question is whether or not these two are going to work things out. Will they get it together or is that bachelor pad really T.I.’s first step towards divorce? Tell us your thoughts in the comments below!