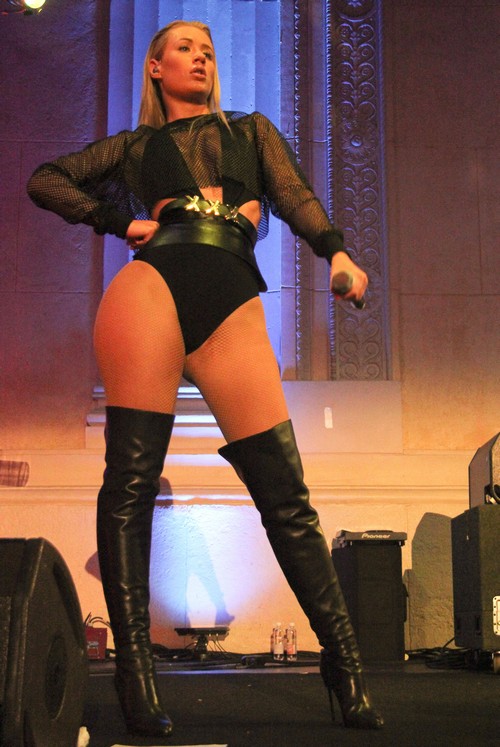 Seems like these days, to make it big, you have to “make it big.” And by that we mean the continuous flow of women jumping on the expand-wagon and growing their rears to enormous sizes for attention. What started with J.Lo having a bigger rump that men melted over and women admired, Kim Kardashian took WAY too far. J.Lo has a figure that is curvy, but still of normal proportions. Kim has injected her ass so much, I’m surprised collagen doesn’t come out of her pores when she sneezes. Then, Nicki Minaj plumped her rump as well. All of these women swear to you it is all natural. News flash…they are not lying…collagen is a natural protein made from human or animal sources. So, when they say their bum is all natural, they can do so with a straight face. Guess they were never asked whose “all natural” it was!

Now there is yet another faker who seems to believe Google doesn’t exist. How else can you tell fans your ass is natural when a quick Google image search shows otherwise? If you haven’t seen or heard her yet, you likely will soon as Australian rapper Iggy Azalea, né Amethyst Amelia Kelly, is starting to get airplay in the US and will need us to make room for her and her oversized behind very soon. Iggy, 23, former girlfriend of A$AP Rocky has begun to make a name for herself through the typical tactics we have come to see over and over again. Wearing barely there outfits, dating a famous rapper, making idiotic comments, oozing sex with every picture, and expanding your bottom line (and we don’t mean in a business sense) are the quick-fix ways to get attention and needed PR to make a name for yourself. Just ask KK and Ms. Minaj since they both fit the description to a “T,” right Anna Wintour?

Iggy can be seen just about everywhere with TI who signed her to his Grand Hustle label after she has a fall out with Interscope. TI seems quite fond of Iggy’s derrière as he almost always has a hand on it. Wonder what Tiny, TI’s wife thinks about that! Even if Tiny caused a stir, it wouldn’t be the first time the rapper has come under fire. Back in 2012 Iggy was put on blast by rappers who attacked her for her lyrics in her song titled “D.R.U.G.S.,” in which she raps:

When it really starts I’m a runaway slave…master”

Oddly enough, after penning an apology about the lyric, along with her explanation, Iggy signed the ode to fans as Iggamonster. Not too sure Gaga, aka Mother Monster, will like that name. Iggy, likely, will continue on her path of destruction that so many wannabes follow with her ignorant comments, twerking and touching herself on stage during concerts, her barely-there outfits, and her love of men in the rap industry. And if her career does not implode over all of that, likely her ass will. It could get ugly. Stay tuned to see whose next on the Plump the Rump bandwagon.

Check out some before and after Iggy Butt Shots