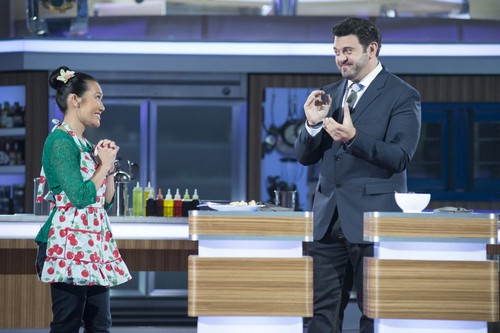 Tonight on NBC their new cooking show FOOD FIGHTERS airs with their second episode. On tonight’s episode called, “Kena Peay” an unemployed home chef faces off against five professional foodies in a culinary bid to net $100,000.

On the last episode a married mother of three tried to win up to $100,000 as she faced off one by one against five culinary pros, including acclaimed celebrity chef Lorena Garcia. Television personality, author and food enthusiast Adam Richman (“Man Vs. Food,” “Fandemonium”) is the host of this series that takes culinary sparring to an exciting new level. Did you watch the last episode?  If you missed it we have a full and detailed recap, right here for you.

On tonight’s episode it’s the perfect recipe for the ultimate food battle when the best amateur cooks in America put their signature dishes to the test against five professional chefs in this high-stakes culinary game. This week, a single, unemployed home chef tries to win up to $100,000 as she faces off one by one against five culinary pros, including acclaimed celebrity chef Cat Cora.

Tonight on a new episode of Food Fighters a new home chef from Dublin California competes against 5 pro chefs to win $100,000. After being unemployed for over a year this home chef is in it to win her financial freedom and a new home.

We meet Kena Peay  who is unemployed due to a lay off and is now living with her brother. Her background was in fashion where she worked for 10 years until she was laid off. Now she hoping to show her skills in the kitchen to win $100,000 so she can move out of her brother’s house and get a place of her own.

Her first opponent is the BBQ pit master Chad Ward who’s specialty is the beef briscuit. The host reveals Kena’s menu of grilled cheese, milk & cookies, pan-seared pork, shrimp op-boy and spring rolls. To compete against Chad she choses to make her tomato soup and grilled cheese. Both chef’s head to the kitchen and are put to work as soon as the clock starts. Kena is betting on the fact that Chad may not know how to make  tomato. Kena’s secret weapon on the grilled cheese is using mayo on the bread instead of butter. Chad proves Kena right when Chad reveals that he’s never made tomato soup before. When the clock runs out both dishes are off to the dinner party which consist of everyday people who will judge the food. The dinner party hands in the results and in a unanimous 5-o decision the winner is Kena who is now $5,000 richer.

She has a chance to win another $10,000 in her next challenge against pro chef and food truck owner Daniel Shemtob. Kena picks from her menu and decides to go with milk and cookies because Daniel doesn’t do desserts and has never made a cookie before. Kena goes in feeling really confident because chef Daniel is really confused as to how to make cookie dough. Daniel’s cookies don’t come out so good so he opts to make fried dough instead calling them cookie monsters. He places them in the milld and drizzles chocolate syrup over them while Kena stays with the traditional style.

The dinner party deliberates and in a unanimous decision the winner is Kena again adding $10,000 more to her winnings totaling $15,000. Kena is super excited since she is banking on her innings to get a new start in life since she’s been laid off for over a year. But there’s not a lot of time to celebrate since it’s time to take on her next opponent pro chef  Deborah Benaim the self proclaimed “Latin Assassin” who works at a popular restaurant in Beverly Hills. Kena goes with her crispy spring roll to take on Deborah. Deborah is super excited and feels she has the competition in the bag. Kena jumps in feel in pretty confident since she has 2 wins under her belt but admits she is a bit intimidated by Deborah’s resume.

20 minutes goes up on the clock and the chefs began scrambling around the kitchen to make spring rolls. Deborah adds a Moroccan flare her dish to bring a little of herself to the recipe while Kena sticks with a family recipe passed down by her mom. Time runs out and the spring rolls go to the dinner party and whether Kena wins another $15,000 is totally in their hands. The judges hand down their decision and in a 3-2 vote the winner is Kena. Kena is stunned and so is Deborah who thinks her spring rolls shove won.

“It’s like winning a salary in 1 day.” Kena has to pull it together to face her next opponent Stefan Richter who is the chef and owner of 8 restaurants all around the world and has career that spends over 3 decades. Stefan is super confident and says cooking is not a hbooy for him but a passion and his work. Kena says bring it on she loves a challenge. She chooses to make her shrimp po boy to take on this world renown chef. Kena says she made the choice because Stefan doesn’t seem to have any cajun influence. Meanwhile Chef Stefan choses to go a different route since he isn’t impressed by the boring choice of a po boy sandwich. He decides to make a Scandinavian po boy with dill. Chef Stefan shows his confidence by taking time to check on Kena in her kitchen. Kena isn’t impressed and says she’s here to win some money not a date. Time runs out and the plates go to the dinner party.

The decision is handed in and in another 3-2 decision the winner is Kena making her $20,000 richer for a goal of $50,000. Kena is estatic and chef Stefan is happy too and says he’ll be rooting for her. Kena now has $50,000 and she says that it’s life changing. Kena and audience are quieted while the host says it’s time for the main event where Kena must take on chef Cat Cora. Chef Cora is the first woman ever to be inducted into the culinary hall of fame and the first female iron chef. Chef Cora comes out confident saying her style is global and she’s ready to slay the competition. Kena says she has a lot of respect for chef Cora and it’s an honor to compete against her but she wants to win that money. They are given the last dish on the menu which is the pan-seared pork which makes Kena nervous because she knows chef Cora can cook anything. When the clock runs out Kena is really worried because Chef Cora’s dish looks amazing.

The dinner party tastes both dishes and makes their decision for the final competition. With $50,000 on the line the decision is handed down. In another 3-2 decision the winner is Kena. Kena runs over to her mom, hugs her and bursts out in tears. She is now $100,000 richer and says it is life changing.