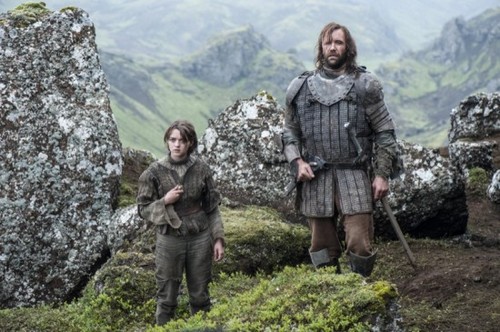 Tonight on HBO, Game of Thrones is back with the finale episode of Season 4 called “The Children.” On this evening’s episode, Daenerys must face harsh realities; Bran learns more about his destiny; Tyrion sees the truth of his situation; and circumstances north of the Wall are altered by an unexpected arrival.

On last week’s episode, Jon Snow (Kit Harington) and the rest of the Night’s Watch faced the biggest challenge to the Wall yet. This Battle for Castle Black promised to be the biggest war scene in Game of Thrones history, with the entire episode focused on Jon Snow and the Night’s Watch fight with The Wildlings. Did you watch last week’s episode?  If you missed it we have a full and detailed recap, right here for you.

On tonight’s episode, in the season 4 finale, an unexpected arrival north of the Wall changes circumstances. Stannis decides to come and lends his hand to the Night Watch.  Of course Stannis has ulterior motives.  Dany (Emilia Clarke) is forced to face harsh realities that if she leaves to go and claim her throne the slaves she freed will soon be enslaved again. Bran (Isaac Hempstead Wright) learns more of his destiny. Tyrion sees the truth of his situation.

The show opens with Jon Snow heading out into the wild lands. Crows scavenge the corpses of dead Giants, and there’s an eerie stillness washing over the land. As he walks through the forest, he eventually finds the Wildlings. Mance Rayder comes out of his tent. Jon says that he’s come to “negotiate.”

The conversation starts out surprisingly cordial. Jon tells Mance that Ygritte is dead, though it was not by his hand. Mance says that they will drink to Ygritte. Mance says that he and his people aren’t there to conquer; they merely want safety from the impending winter. Mance says that if he gives them access to their tunnels, to allow them to travel to safety behind the wall, then they won’t unleash anymore attacks on Castle Black.

Meanwhile, a giant army parades through the forest. Mance wonders if it’s the Night’s Watch, but Jon admits that they don’t have enough manpower for an attack of this scale.

The army wipes out a good deal of the Wildlings.

Eventually, it’s revealed that Stannis is behind the attack.

Stannis approaches Mance and wants him to kneel, but Mance says that they do not kneel, not for anyone. Jon tells Stannis that he is Ned Stark’s son and convinces him to let Mance live. He will be taken as a prisoner.

Back in King’s Landing . . . . Cersei is trying to save her champion, who was poisoned with manticore venom when he was sliced by Oberyn’s weapon. A doctor says he might be able to help him with alternative methods, though he warns Cersei that it could change him. Cersei tells the physician to do all he can. Just save him.

Cersei talks with Tywin. She says that she won’t marry Loras Tyrell. She says that she will not be shipped off. She gets very, very mad and reveals to Twyin that all the rumors are true: She and Jaime are together. She tells him that his legacy is all a lie.

Next, she goes to see Jaime, and she says that a person can choose family. She says that she chooses him, not Tywinn Lannister, and that she will stand her grown in King’s Landing — all while by her son, King Tommen.

Daenerys talks with a previous slave. He’s very, very old and asks her to allow him to be “bought” again. She doesn’t like the idea, but eventually she says that she’ll allow a contract to be drafted that will grant him his wish.

Another man comes up to talk with Daenerys. He presents her an armful of bones: his daughter. His child was charred to a crisp by one of her dragons, Drogon, who cannot be found at the moment. She feels guilty that one of her dragons did such a thing.

Her dragons are growing up — and they’re growing fiercer. Distraught, unsure of how to deal with their terror, she locks them in a dungeon.

Back on the wall, they burn the bodies of the fallen.

Jon Snow takes Ygritte’s body beyond the wall to burn her body in a touching ceremony — to honor her. As he sets the wood on fire, he walks away and begins to cry.

Meanwhile, Bran and his party arrive at the glorious tree from their visions. They approach it but as they make their way across the snow to the tree, demon skeletons pop out of the earth!

Jojen is stabbed to death.

A small girl saves them by throwing some magic fire at the demon skeletons. They make it to the tree, where the dark power is ineffective. Bran asks the girl who she is. She says that the First Men called them The Children, but she admits that they were born long before them and are actually much older. She leads them further into the space beneath the tree.

The man who’s been controlling the Three Eyed Raven says that he has been watching them all . . . all their lives. The old man, who’s entangled in the tree, says that Jojen knew all along what he had coming to him. But that he left on this journey anyway — to help Bran recover what he’s lost. Bran thinks the old man will help him walk again. “You’ll never walk again,” the old man admits, “but you will fly.”

Brienne wakes up in a furious state, wondering where their horses have gone.

Brienne stumbles into Arya Stark. After many moments, Brienne realizes Arya’s true identity, and tells her that she swore to her mother that she’d protect her. The Hound isn’t really having this. Soon, The Hound and Brienne engaged in battle.

Brienne wins. She bashes The Hound’s face in and he goes rolling down the cliff.

Arya evades Brienne and Pod, and goes to find The Hound, who’s laying on his deathbed at the bottom of the cliff. The Hound, dying, encourages Arya to travel alongside Brienne, as he thinks she won’t last a day out there. “I’ll last longer than you,” Arya says.

The Hound begs Arya to end him.

But she doesn’t. She takes his gold and walks away.

Meanwhile, Jaime sneaks into the dungeon to break Tyrion out of jail. Jaime says that Lord Varys is helping him. Tyrion thanks Jaime for saving his life.

Tyrion is on his way out when he stops by Shea’s room. He strangles her. She’s dead.

He continues sneaking through the corridors.

Tyrion has a crossbow.

Tyrion wonders why he sentenced him to death even when he knew he didn’t poison Joffrey.

Arya has found a horse and is now riding solo. She finds a shipping crew. She wants to sail with them. At first, the captain is wary of letting her go along. They are sailing to Braavos. She presents to the captain the iron coin she was given and says, valar morghulis.

He welcomes her on board.