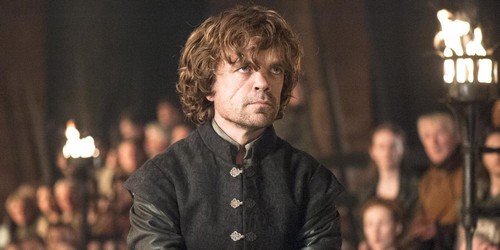 On tonight’s GAME OF THRONES the show was another great one.  I cannot wait till next week’s episode, sadly the episode will be delayed by one week due to Memorial Day.  The next episode is called, “The Mountain and the Viper” and we have managed to get our hands on some juicy spoilers and a sneak peek video of next week’s episode.

On tonight’s show Tyrion enlisted an unlikely ally. Daario entreats Dany to allow him to do what he does best, fight or make love. Jon’s warnings about the Wall’s vulnerability fall on deaf ears. Brienne follows a new lead on the road with Pod.  Sansa is kissed by Little Finger.  Little Finger’s new wife tries to push Sansa through the moon door.  Oberyn tells Tyrion he will fight for him in his trial by combat.  More happened, did you watch tonight’s show?  If you missed it, we have recapped it for you HERE!

Spoiler alert: If you’re one of those people who doesn’t like spoilers, stop reading now! We have some juicy spoilers for you about the season 4 episode 8 HBO’s “Game Of Thrones.”

HBO’s Official Synopsis: “Unexpected visitors arrive in Mole’s Town; Littlefinger’s motives are questioned; Ramsay tries to prove himself to his father; Tyrion’s fate is decided.”  The episode was written by David Benioff & D. B. Weiss; directed by Alex Graves.

On the next episode Oberyn Martell “The Red Viper” will get his chance to avenge his sister’s death as he acts as Tyrion’s second.  Oberyn wants to avenge his sister, Elia death and he will be fighting The Mountain, Gregor Clegane who killed his sister and her children.  Ramsay Snow and Reek/Theon arrive at Moat Cailin on the Neck.  Ramsay sends Reek/Theon Greyjoy to Moat Cailin and he tells him he is to pretend he is Theon Greyjoy and bring the Moat to him.   Mance’s army is getting close to the Night Watch and Jon is worried.

The title of the next episode is a reference to Ser Gregor Clegane, known as “The Mountain That Rides” for his immense size, and Prince Oberyn Martell, known as “The Red Viper”.

The Game Of Thrones Season 4, Episode 8 “The Mountain and the Viper” airs on HBO on June 1st, 2014. Check out the preview videos from episode 8 below and let us know in the comments below what you think!