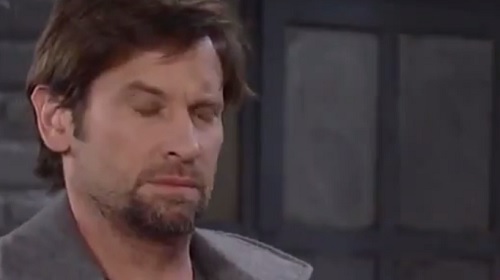 General Hospital spoilers tease that the Friday, December 12 episode of the ABC soap will be full of shocking revelations, and of course cliff-hangers. General Hospital spoilers reveal that the hunt for Ava Jerome’s kidnapped baby is really heating up, and Dante Falconneri has finally tracked down Franco. In the GH spoiler video for tomorrow’s episode, Dante confronts Franco while he is carrying something wrapped in a pink blanket.

In the all new General Hospital promo video Dante tells Franco “It is over,” and orders him to hand over the baby. Meanwhile, Ava and Silas arrive in Canada and are also closing in on Franco and Nina. Rumor has it that the blanket Franco is carrying is empty and just a decoy and he is just distracting the police while Nina slips out the back with Ava’s baby and gets away once again.

The General Hospital spoiler video for Friday’s episode also teases another brawl in Pentonville — Sonny Corinthos appears to be attacking Johnny Zacchara. Meanwhile, across town, Carly has a heated discussion with Carlos Rivera. Alexis visits Julian Jerome, in what appears to be a prison cell, he seriously spends more time behind bars than he does as a free man. In the spoiler video Alexis informs Julian that she has come to see him “for her daughter.” Most likely Alexis is trying to find Ric Lansing, since she recently learned he was alive, but is missing from the witness protection program.

According to General Hospital spoilers, Sam is on to Jake, and she knows he was the gunman that took her hostage and helped free Cesar. In the GH spoiler video for Friday’s episode of the ABC soap, Sam pays Liz a visit to warn her about her new roomie and that he may be dangerous.

So, GH fans, do you think that Ava will be reunited with her baby tomorrow? Or will Nina and Franco outsmart Dante and the rest of the search party? Does Julian know where Ric Lansing is? What does Carlos want with Carly? Let us know what you think in the comments below and don’t forget to check CDL tomorrow for more General Hospital spoilers and news.