General Hospital Spoilers: Dante and Lulu’s Second Child – Where Did Dr. Obrecht Hide Their Other Baby?

BY Amanda Austin on April 14, 2014 | Comments: one comment
Related : Soap Opera, Spoiler, Television, The Young and the Restless 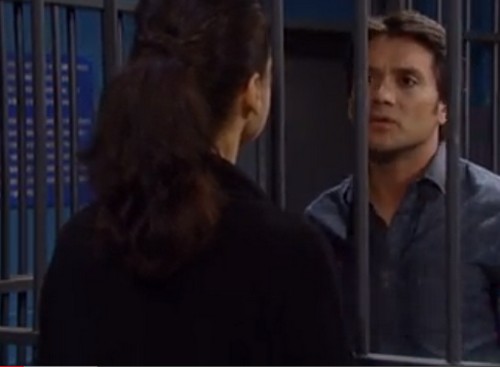 There were so many shocking revelations last week on ABC’s daytime drama General Hospital that it is hard to keep all of the new developments in Port Charles straight. One particular spoiler bomb that was dropped last week still has GH fans’ heads spinning. Lulu and Dante began the week with no baby and by the end of last week they had not one, but two babies!?

Dante and Lulu recently learned that Liesl Obrecht and her daughter Britt had stolen their embryos and impregnated Britt with them. So, Britt was really nothing more than their surrogate mother and her son Ben was actually Dante and Lulu’s biological baby. When the truth came out Liesl kidnapped Ben, however Britt’s guilty conscience kicked in and she set her mother up and got Ben back for Dante and Lulu.

Dante arrested Dr. Obrecht and threw her in a Port Charles Police Department cell. Liesl Obrecht always has a Plan B though. After spending a few hours in jail she asked to speak to Dante, and told the officer on guard she would only give her statement to Dante. When Dante arrived Liesl demanded he drop all charges because she had something he wanted. He reminded her that he already got Ben back, and then she scoffed “what about your other child?”

So, apparently Britt wasn’t the only person that Liesl implanted one of Dante and Lulu’s embryos in. Where is Dante and Lulu’s other child? There aren’t too many babies on General Hospital right now. Dante and Lulu already have Ben, so that leaves Sam and Jason’s son and Sabrina’s unborn child. There is also the chance that the child hasn’t even been introduced to viewers yet, Liesl may have implanted the embryo in a woman that GH fans haven’t even met yet.

Where do you think Dante and Lulu’s other child is? Could it be Sam’s son or Sabrina’s unborn child? Or is the baby implanted in a woman we have never met or already been born and living with another family that doesn’t live in Port Charles? Share your thoughts and theories in the comment section below and don’t forget to check CDL tomorrow for more General Hospital spoilers.