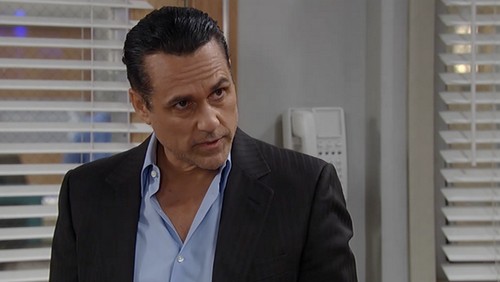 Nine times out of ten soap opera rumors and spoilers have some truth to them. We are really hoping that isn’t the case with this one. A persistent General Hospital rumor that just won’t seem to die is that Sonny Corinthos will be exiting GH soon — so that Maurice Benard can take some time off to promote his new movie.

Benard even tweeted this message to fans recently, adding more fuel to the rumors: “Meet & Greet with me! Aug 1st. 6:30PM Includes Q&A Panel with myself, directors and actors from @GhostWhaleMovie.” So Benard will definitely be promoting his new film The Ghost And The Whale this summer, which means there is a good chance he will take some time off from filming General Hospital to do so.

If Sonny were to exit the Port Charles story line, now would be as good a time as any. His relationship with Olivia is kaput, his baby-mama is a cold-blooded killer, one of his sons has disowned him, and the other one will be sure to follow if he learns Sonny killed AJ Quartermaine. On top of all of the obvious pressure Sonny is under, he has an anonymous mobster trying to take him out. The character of Sonny Corinthos is no stranger to mental illness and manic behavior, and we sense a full-blown mental breakdown coming his way.

So, if Maurice Benard is truly taking time off from filming, it wouldn’t be far-fetched if Sonny Corinthos left Port Charles for a while to go into hiding or try to escape from his messy life. It is hard to imagine General Hospital without Sonny Corinthos, but they have so many characters and story lines going on right now, it wouldn’t be difficult to fill air time without him.

What do you think General Hospital fans? Do you believe the rumors are true and Maurice Benard will be taking a few months off from the ABC soap opera? Will you still watch General Hospital if Sonny Corinthos is MIA? Let us know how you feel about it in the comment section below and don’t forget to check CDL for all of your General Hospital spoilers.