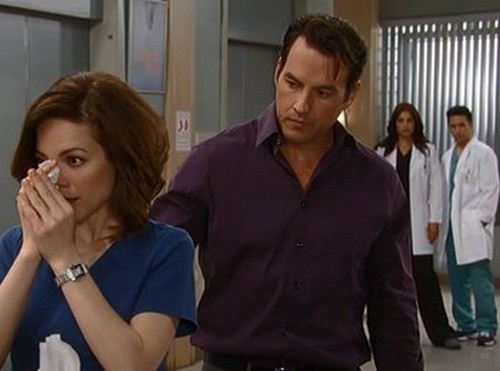 The mob war in Port Charles is heating up again, and according to General Hospital spoilers for the week of June 9th-13th there will be another shooting on the daytime drama. Although there is no news yet on which GH character will be getting gunned down next, the June 23rd issue of Soaps in Depth teases the victim may be Jordan, Julian, Ric, Anna, Sonny, Ava, or a member of one of those key players’ families.

According to General Hospital spoilers, Ava and Sonny will continue to bicker over Ava’s living arrangements during the week of June 9th. Ava doesn’t see why she can’t live at her own house, but Sonny isn’t foolish enough to let the pregnant mobstress out of his sight.

Sam Morgan puts her concerns about Silas and his wife Nina on the backburner and decides to distract herself by helping Patrick search for the driver that ran him and Sabrina off the road, inadvertently causing the death of his baby Gabriel. Ironically there is a rumor making its rounds on the internet that Rafe was driving around high that night and is the driver that caused Patrick’s accident. There is also a good chance there is some truth to that rumor, because General Hospital spoilers tease that Rafe is haunted by a memory of his. Perhaps he is feeling guilty about the accident when he learns Sabrina and Patrick’s baby didn’t make it?

General Hospital spoilers for the week of June 9th also tease that Julian Jerome’s guilty conscience is getting the best of him, and seeing how Alexis and Molly are reacting to Ric Lansing’s incarceration is eating him up inside. Meanwhile, Jordan is feeling guilty also, and desperately wants to wrap up the case of Julian’s boss, so that she can reveal the truth to TJ about her double-agent status and get back in his good graces.

The week of June 9th looks like it will be full of can’t-miss drama on General Hospital. Who do you think will wind up shot on June 11th? And, do you think that Sam will discover that Rafe is actually the driver that ran Patrick and Sabrina off the road that fateful night? Let us know what you think in the comments below and don’t forget to check CDL tomorrow for more General Hospital spoilers.