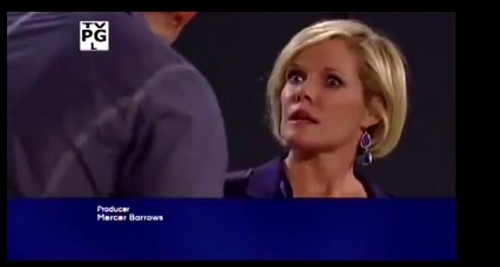 The ABC daytime drama General Hospital is full of excitment this week, and an unexpected bun in the oven. When Sonny headed to the island to kill Ava and avenge Connie’s death, she threw General Hospital fans for a loop and announced she was pregnant with either Sonny’s baby (from their infamous tryst in the crypt) or his son Morgan’s baby.

Although Ava produced a positive pregnancy test to back up her claims, Sonny dragged her back to Port Charles to find out whether she was truly pregnant, or this was another one of her schemes to get herself out of trouble.

So, the question on every GH fan’s mind is obviously, is Ava Jerome really pregnant? Or is she faking her pregnancy to buy herself some more time? Well, according to the General Hospital spoiler video for Wednesday June 4th, Ava Jerome is very much pregnant.

In the video Sonny fills Carly in on why he hasn’t killed Ava yet. And, Morgan pays his maybe baby-mama a visit, he doesn’t seem thrilled about the idea of possibly having a baby with the mobstress. In the spoiler video Morgan tells a shocked Ava that she should go have an abortion.

General Hospital spoilers for June 4th also tease that General Hospital fans can expect to see some more of Y&R alum Michelle Stafford as Nina Clay. In the sneak peak video Sam watches in horror as Nina tells Silas, “It’s me. I’m back.” Ironically Sam and Silas just professed their love for each other, and it will be truly interesting to see if their love withstands the test of Silas’s not-so-dead wife crashing Danny’s birthday party. Silas may be over Nina, but Nina is clearly still in love with Silas.

Do you think that Ava is truly pregnant, or is there still a possibility that she orchestrated this entire thing and contacted someone at the hospital and paid them to fake her pregnancy test? And, what about the rapidly developing love triangle between Nina, Silas, and Sam? Do you think Nina’s return could thwart Sam and Silas’s budding relationship? Let us know what you think in the comments below and don’t forget to check CDL tomorrow for more General Hospital spoilers.