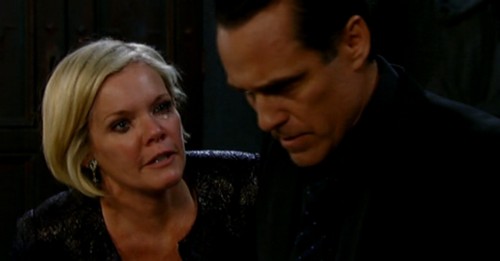 There were some crazy revelations on General Hospital, and spoilers tease that the fallout from those reveals will rock Port Charles during the week of June 2 – 6. General Hospital fans were shocked when Julian Jerome falsely implicated Ric Lansing as the mastermind of his operation. GH spoilers tease that during the week of June 2nd Ric’s arrest will have a negative impact on Alexis and Molly. Meanwhile Julian will think he is in the clear, and vow to his son Lucas that their family is safe.

Sonny Corinthos recently learned that Ava Jerome may be pregnant, according to General Hospital spoilers he will drag her back to the hospital in Port Charles to see if she is telling the truth about her possible bun in the over. Once Sonny arrives in Port Charles he fills Carly in on the recent revelations, and she is furious with Ava. GH fans can expect a heated altercation between Carly and Ava by the end of the week.

On June 3rd Sam and Silas will gather in the park for Danny’s eventful birthday party. Spoilers tease that Silas’s not-so-dead wife Nina, who will be played by The Young and the Restless alum Michelle Stafford, will make a surprise appearance in Port Charles during the birthday party. By the end of the week Sam and Silas’s relationship will be strained due to Nina’s return.

General Hospital fans have been buzzing for weeks about the chemistry developing between Maxie and her roomie Nathan. Spoilers tease that during the week of June 2nd Maxie and Nathan will share a close moment, and Nathan will accompany her to court to see if she will be allowed to see her daughter Georgie, who is currently living in Portland with Maxie’s baby-daddy Spinelli.

So General Hospital fans, do you think Ric Lansing will rot in Port Charles prison or will he somehow prove his innocence? And what about Julian and Alexis? When the truth comes out and it is revealed that Julian sent an innocent man to jail, will Alexis forgive him? Do you think Ava is really pregnant, or is she faking it? Share your thoughts and theories in the comment section below and don’t forget to check CDL for more General Hospital spoilers.