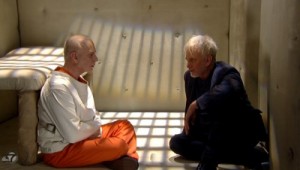 The “Luke Spencer Imposter” storyline has been dragging on for months on ABC’s daytime drama General Hospital. Although most GH fans had already come to the conclusion that the Luke Spencer we have been watching is an imposter, it was confirmed on the May 30th episode when Fake Luke paid Real Luke a visit in Miscavige where he had stashed him away. TPTB at General Hospital had teased that Fake Luke would take a really important meeting on May 30th, and drop a huge clue about his identity.

We all gathered around our televisions and watched Fake Luke taunt Real Luke, waiting for the “huge clue” to be revealed and finally resolve the million dollar question – who is the Luke Spencer imposter? The episode came and went, and GH fans felt like they had been duped. There were no clues dropped by Fake Luke about his true identity…or so we thought.

After re-watching yesterday’s scenes between Real Luke and Fake Luke, we noticed a huge clue that we had totally overlooked the first time we watched the May 30th episode. Real Luke tells Fluke that he can’t kill him, he might need something from him. Fake Luke agrees and comments, “You know what? You’re right. I might need some DNA. Hell, I might need a kidney. God knows your liver is useless.”

All this talk about DNA and kidneys got us to thinking. There actually is one suspect on the list of possible Luke Spencer imposters who shares the same DNA, and would be able to use one of Luke’s kidneys since they are related to one another. Bill Eckert, Luke Spencer’s doppelganger/cousin.

Bill Eckert was actually killed off from General Hospital in 1993, but that doesn’t mean anything. Dozens of characters on General Hospital have risen from the ashes numerous times on the ABC soap opera. When Sonny Corinthos first learned someone was bankrolling Julian Jerome, he tracked the funds to an account once owned by Barrett Enterprises and Julia Barrett. Ironically, Julia Barrett dated Bill Eckert off and on for the two years that he was on General Hospital. Bill’s girlfriend Julia Barrett also could explain his beef with Sonny. The Barrett Family despises Sonny because of all the trouble he brought on his on-again off-again girlfriend Brenda Barrett (Julia’s little sister), and all of the times her life was endangered because of her relationship with Sonny.

You’re probably wondering why Bill Eckert would want to drug his own cousin and lock him in a room and throw away the key? Bill was shot and allegedly killed by mobster Frank Smith and his men in 1993, but it was actually Luke’s fault that he was shot. It was a case of mistaken identity. If Luke hadn’t gotten involved with the mob, Bill never would have wound up shot.

So General Hospital fans, are you convinced that Fake Luke is Real Luke’s cousin Bill Eckert? Do you think the comments about DNA and kidneys was a dead give away, or are we over analyzing what was said between the two men? If not Bill Eckert, then who do you think Fake Luke is? Let us know in the comment section below, and don’t forget to check CDL tomorrow for more General Hospital spoilers.

Check out this amazing video of an interview with Tony Geary from when he played Bill Eckert back in the day. Once thing about this video is it might call into question the Bill Eckert is Fake Luke theory – because the video shows Bill’s death in 1993 – and he seems VERY dead. We will see….