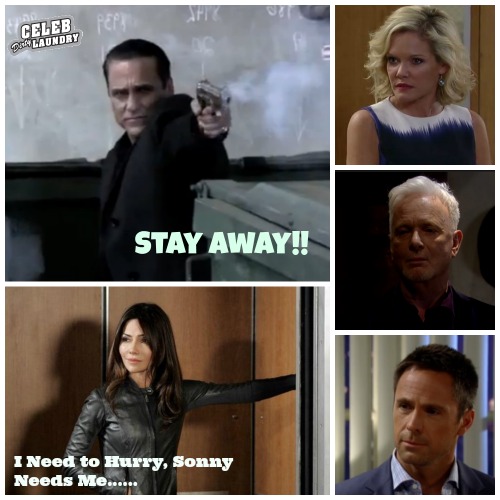 Characters are always coming and going on ABC’s popular soap opera General Hospital, but fans are seriously missing Vanessa Marcil’s character Brenda Barrett. Barrett was written off the show in 2011, when she and her son moved to Europe after years of a tumultuous relationship with Sonny Corinthos. Sonny’s ex returned to GH exactly a year ago as a surprise guest during the 2013 Nurses Ball, to pay her respects to Robin, and then headed back to Europe.

Two major storylines on General Hospital could pull Brenda Barrett back to Port Charles, and fans are waited with bated breath to see if one of their favorite characters reemerges. Fake Luke’s true identity is still very much a mystery to GH fans, however we know that he is somehow linked to Barrett Enterprises, which is Brenda’s family’s business. Some fans believe Brenda’s older sister Julie could be orchestrating the Fake Luke attack on Sonny Corinthos to seek revenge for all of the times he broke her heart and all of the trouble he got her in to. If that is the case, and Brenda gets wind of the scheme, then perhaps she will show up in Port Charles and shut it down?

Another potential storyline involving Sonny could pull Brenda back to General Hospital, and for obvious reasons – he’s going to need someone to hold his hand and help him through the latest mess he has created. Not only is Sonny on the verge of losing his son Michael, his sanity, and his freedom after shooting and killing AJ Quartermaine, Sonny is also very single again now that Olivia has kicked his cheating butt to the curb. If there is anyone who can pull Sonny out of this slump and help him put his life back together, it’s his long lost love Brenda Barrett.

We aren’t the only ones who hope to see Brenda Barrett back in Port Chester, the actress that coined the role, Vanessa Marcil is also hoping for a comeback. Marcil told ABC Soaps that she adores GH and is always trying to work out something so that she can return. According to Marcil, “The bottom line is I’ always ready to go.”

So, for those of you hoping that Brenda Barrett will be returning to Port Charles, there is a serious chance it might really happen. The actress is 100% willing to return to the soap and there are two ways the writers could currently write in the character. What do you think General Hospital fans? Do you want to see Brenda Barrett swoop in to Port Charles and help Sonny clean up his mess? Let us know what you think in the comments below!

Let’s have a look at how Soap Opera Spy people feel about the possible return of Vanessa Marcil:

Can’t stand her. Use to like her. One more reason to quit watching. Why don’t the producers get it. That’s why the day of the soap is going away.

How long is Brenda coming back for?

We have heard not for long just a short story arc – could be few weeks to a couple of months most likely.

I can do without Brenda Botox.

i really liked brenda back in the day but the last couple of times she came back not so much…………..

I think…..She had a baby and it’s Michaels….not to mention I always thought of her as a tramp and I think her son belongs to Dante. So now I think she will get pregnant by Morgan. Untimate revenge against Sonny. Having a kid by each of his sons….. Can’t stand her.

her & michael never slept together – she just made it seem like she did to piss off carly…………….

It makes sense for Brenda to return now.

Sonny was a fixer and now he’s the one who needs fixing – is Brenda the one to do it?