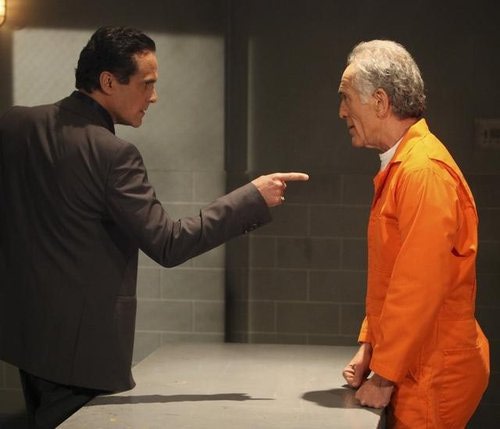 General Hospital fans have been racking their brains for weeks, and speculating about what is going on with Port Charles resident Luke Spencer. Luke was kidnapped by Heather and she stashed him in Miscavige for several weeks. When he was finally rescued, he wasn’t quite the same Luke that we remember. At first General Hospital viewers began picking up on tiny things that were a little off with him like cursing out Monica while AJ was on his death bed and asking Tracy to marry him (again). There was officially something seriously off about Luke when he began groping and harassing Michael’s young girlfriend Keke.

There is no question that something is “off” with Luke Spencer. But, what exactly is it? It may be something as simple as the sedatives that were administered to Luke could have done some permanent mental damage, but highly unlikely. Has he been playing us for years and we are finally seeing the character’s true colors? Or, could Helena be back in business (courtesy of Dr. Robin Scorpio-Drake), and has she sunk her claws into Luke and hypnotized him just like she did to Lucky? Scot Baldwin was locked in the room in Miscavige with Luke, and according to his hazy account, orderlies came in and dragged Luke out of the room and said “it’s time.” Time for what? Well, General Hospital is known for its modern medical miracles, maybe someone created some sort of drug that alters people’s personalities and behaviors and injected Luke with it?

Considering how serious Luke is about getting even with Sonny, most GH fans have come to the conclusion that Luke Spencer is still hidden away somewhere in Miscavige and the Luke that is running around Port Charles wreaking havoc is actually an imposter. We have put together a list of possible imposters – and why they may be trying to bring down Sonny Corinthos.

As far as we are concerned the number one suspect on our list is Luke Spencer’s cousin, and doppelganger, Bill Eckert (both characters were portrayed by Anthony Geary). Bill Eckert appeared on General Hospital from 1991-1993. Bill and Luke were identical, they were played by the same man, if anyone is going to run around Port Charles pretending to be Luke the reasonable explanation would be his twin cousin. Eckert wouldn’t need any plastic surgery or masks to pull it off. Bill Eckert dated Julia Barrett, the older sister of Sonny’s ex-girlfriend Brenda. Julia always despised Sonny for all of the times he hurting Brenda and getting her mixed up with his mobster lifestyle. When Sonny first found out someone was funneling money to Julian Jerome’s organization, it was traced back to Barrett Enterprises, which Bill Eckert once owned. There is only one slight hiccup with our Bill Eckert theory-he was shot to death over twenty years ago. No one on General Hospital stays dead forever though!

Mobster Anthony Zacchara has come back from the dead multiple times since his first appearance on General Hospital back in 1976. The sociopath was one of Sonny Corinthos’ arch nemesis, he shot Sonny’s wife Kate and his son Dante, and tried to take over the Corinthos family business. He also has ties to Tracy Quartermaine and once blackmailed her into marrying him for her money, so it would make sense that he chose to impersonate Luke Spencer so that he could marry Tracy again and get more of her money (this also explains why this week Luke refused to sign a pre-nup). Anthony Zacchara was shot to death by his grandson Johnny in 2012, but the last person to see his body was Heather Webber (Port Charles resident psychopath). Webber stole Zacchara’s dead body from the Quartermaine boathouse and allegedly buried it in the woods. Ironically, the men that held Luke captive in Miscavige were on Heather Webber’s pay roll. If Anthony were still alive the one person who would actually know that – is Heather Webber, and they are both crazy enough that we could see them working with each other.

Lorenzo Alcazar is a long shot as a Luke impersonator, however he is another mobster that had some serious beef with Sonny Corinthos and may or may not be dead. Alcazar was allegedly killed by Jason Morgan (Sonny’s henchman) in 2007, however there were rumors circulating in 2012 that his character may be returning because of a bizarre storyline in which Carly and Sky recognized a picture of Lorenzo on a wedding announcement, and he looked very much alive. Also, recently TJ’s Mom Jordan Ashford arrived in Port Charles and approached Julian Jerome and wanted “in” on his drug trafficking operation, and made a huge deal about it. Lorenzo Alcazar was a fan of drug trafficking when he was alive and if he is the Luke Imposter then it makes sense he is running a drug trafficking operation under Julian Jerome’s name.

Trevor Lansing may have the biggest axe of all to grind with Sonny Corinthos (and of course he is also supposedly dead). Trevor was Sonny’s love Kate’s ex, and the father of Sonny’s half-brother Ric Lansing. The reason we like the idea of Trevor being the Luke Imposter trying to take Sonny down is because of the simple fact that Ric just returned to Port Charles within the same week that Sonny learned the Jerome organization was being bankrolled. It is too huge of a coincidence that Ric decided to return to Port Charles the same time that the Luke Imposter began running around Port Charles. Could he be working with his Dad Trevor to take down Sonny? Also, it should probably be noted that this isn’t the first time Trevor has ran an entire organization by hiding behind a figure-head. Sonny’s arch-nemesis Anthony Zacchara’s organization was actually bankrolled and ran by Trevor Lansing, Anthony was just the front man.

Jerry Jacks doesn’t have as much beef with Sonny as the other possible imposters do, however any General Hospital fan who remembers Jerry Jacks will tell you that the Luke Imposter is acting just like him (especially his bizarre infatuation with Kiki). Also, the Luke Imposter is working with Julian Jerome who is coincidentally the only ally that Jerry Jacks had in Port Charles. In 2013 when Jacks jumped off a roof-top and was presumed dead, Julian Jerome was the one that saved him and helped him get out of Port Charles.

Cesar Faison has been terrorizing the lives of Port Charles’ residents for decades with one criminally masterminded scheme after another. Cesar Faison at one point went to war with Sonny over the mobster’s assets. The last time we seen Cesar Faison he was trying to get revenge on Sonny Corinthos and his plan was foiled by Anna and Robert. Faison may have decided to return to Port Charles and complete his unfinished business with Sonny by going undercover as Luke Spencer. This theory makes perfect sense because it isn’t the first time Faison has impersonated a GH character. When he originally went after Sonny Corinthos back in the day, he posed as Duke and had everyone fooled by wearing a ridiculously real looking rubber mask. Perhaps Cesar is back for round two with Sonny and is wearing a Luke mask.

And here is what fake Luke did today, April 21 as explained on Soap Opera Digest:

Spencer to Fluke, “Why is that a problem for me.”

Fluke to Spencer, “Because you heard too much. Can you do Uncle Luke a favor and keep this to yourself. You have my last name so you are more bonded to me. Can we keep this a secret between us?”

Spencer, “No I love my Uncle Sonny!”

Fluke, “That is a problem, if you tell anyone about this especially your Uncle Sonny I’m going to have to hurt someone and that someone is you!”

Spencer to Luke, “You are not going to hurt me. My father will come after you, he is a prince you know.”

Luke to Spencer, “The last thing I need is a pompous ass like your father coming after me. Your father is an arrogant jerk. You actually make a good point mini-prince hurting you might not be the right decision. Maybe hurting Emma Drake is a better idea.”

Spencer, “Woah, woah, woah what does Emma have to do with this?”

Luke, “Didn’t you just tell me that Emma is the love of your life. Lets be clear keep your trap shut or something is going to happen to little Emma!”

Let’s be 100% clear – this is NOT LUKE – this is an especially evil person and we are dying to find out who it really is!

So, General Hospital fans-what are your theories on Luke Spencer? Do you think that he has gone crazy, could be brainwashed, or there is a Luke Spencer imposter running around Port Charles? Our of all of the character listed above which do you think is most likely hiding behind Luke Spencer’s identity? Share your thoughts and theories in the comment section below, and don’t forget to check CDL tomorrow for more General Hospital spoilers.