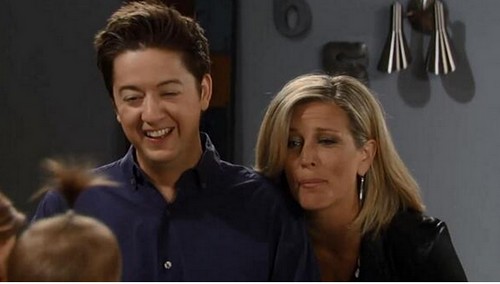 There are so many characters on ABC’s soap opera General Hospital that it is not unusual for weeks, sometimes months to go by without seeing some of the residents of Port Charles. Bradford Anderson’s character Damian Spinelli was a crucial part of GH’s storylines since 2006, however he was written out of the soap opera when he moved to Portland with his daughter Georgie and girlfriend Ellie.

Spinelli recently returned to General Hospital for a brief stint when Carly and Franco jetted off to Portland to get his help cleaning up an audio recording on AJ Quartermaine’s cell phone. After literally an hour long meeting Carly and Franco headed back to Port Charles and left Spinelli in the dust, GH fans weren’t thrilled that Spinelli’s brief appearance was so brief. When it was revealed a few months ago that Spinelli would be appearing on GH again, fans thought that meant he was returning to the soap opera.

General Hospital fans aren’t the only ones who want to see Damian Spinelli back on General Hospital on a more regular basis. Brandford Anderson recently dished to Soaps In Depth that he wants nothing more than for his character to return to Port Charles. Anderson told the magazine, “I think [what just aired] was to establish Spinelli and Ellie in the reality of living in Portland and keeping us on the canvas [in some way]. I think that’s nice! When I left, they very clearly said there was an open door. So by establishing us where we are and having people still use Spinelli for things, that means they can call me any time.”

There is hope for Spinelli fans though, there is a good chance the writers will have to bring him back to Port Charles sometime soon for a current storyline involving his baby-mama Maxie. General Hospital spoilers tease that Maxie will be heading to court in the near future to discuss custody of their daughter Georgie. Perhaps Spinelli will also be at court, or Maxie will land some visitation rights and will have to meet with Spinelli to discuss Georgie’s visits.

What do you think General Hospital fans? Are you a fan of Damian Spinelli? Do you think he will be showing up in Port Charles sometime soon? Let us know what you think in the comments section below, and don’t forget to check CDL tomorrow for more General Hospital spoilers.