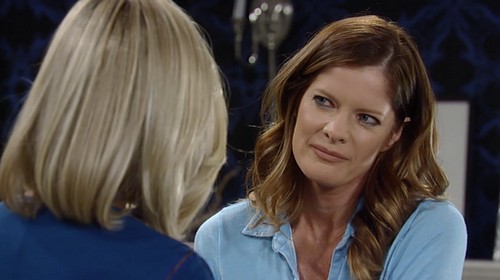 General Hospital spoilers for October 20 – 24 tease another week of shocking episodes on the ABC soap opera. GH spoilers have been teasing for months that there will be major fallout when Michael Corinthos learns that Sonny killed his father AJ Quartermaine. Ava Jerome forced Carlos to confess to AJ’s murder, so Michael hasn’t questioned the fact that he may not be the murderer. However, according to General Hospital spoilers on Monday, October 20th, Michael will learn the truth — that Carlos didn’t actually shoot and kill AJ Quartermaine.

While Michael is dealing with the news that his father’s murderer hasn’t actually been caught, AJ’s real murderer, Sonny Corinthos, will be busy planning another murder. General Hospital spoilers reveal that on Wednesday’s episode of the ABC soap Sonny and Shawn’s scheme to take down Franco hits a snag. Unbeknownst to Sonny, his time is running out and if he doesn’t make a move soon, Franco could expose his secret because he now has a recording of Sonny discussing killing AJ. Franco, who is oblivious to the fact that Sonny is plotting to kill him, will be busy comparing notes and scheming with his new partner-in-crime, Nina.

General Hospital spoilers reveal that Ned’s romantic life gets complicated during the week of October 20th. Julian Jerome has recently been dumped (again) by Alexis. So, on Wednesday, October 22nd, Julian finds himself extremely jealous of the other man in Alexis’s life, Ned. But Ned Ashton will be too busy listening to Olivia confess she has a crush on him to play the part of Alexis’s rebound.

So, GH fans, once Michael learns Carlos isn’t AJ’s killer, do you think he will put two and two together and realize that Sonny is his killer? The feud between Franco and Sonny is really heating up, who do you think will come out on top? And who would you like to see Ned with, Olivia or Alexis? Let us know what you think in the comments below and don’t forget to check CDL tomorrow for more General Hospital spoilers.

Looks Like Nina [Michelle Stafford] is taking some flak and some compliments from Soap Opera Spy Facebook fans:

im so sick of nina.

Yes I agree , GH certainly is making Michelle Stafford look or dress nearly as well as Y n R did. Fix her please.

Nina was awesome today. Michelle is so good being mean.

The clothes were the best part of the soaps back in the day! ( did I really just say that lol) not so much these days. The scenery is all the same so not sure what the production money is spent on lol.