General Hospital spoilers revealed a few weeks ago that Robin Mattson was returning to the ABC drama as Heather Webber. We all assumed Heather’s return had something to do with the Fake Luke storyline, seeing as how she is locked up in Miscavige, which is coincidentally where the real Luke Spencer is also being held prisoner. But, according to GH spoilers, Heather’s return has nothing to do with Fake Luke and is set to tie in to Franco and Sonny’s war over Carly.

A General Hospital spoiler video reveals that Mattson makes her return as Heather Webber on Friday, October 17. In the all new GH promo, Franco is seen arriving at Miscavige to visit his mother, and naturally she is shocked to see her estranged son. The last time Heather was in Port Charles, she and Franco were trying to kill each other. So, it’s anyone’s guess what Franco could possibly want with Heather now. Ironically, Franco’s arch nemesis, Sony Corinthos, also wants something from Heather, and he and Shawn have decided to pin Franco’s impending death on his mother. 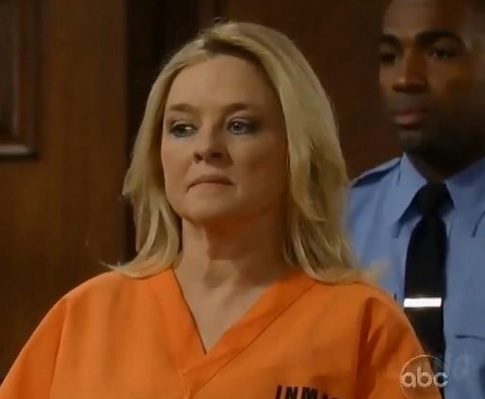 The all new General Hospital spoiler video also reveals that Nina has officially gone crazy. The showdown between Nina and her mother Madeline has finally arrived, and it looks like it will be every bit as explosive as we predicted. After all, Nina and her mom have a lot of catching up to do since her mom put her in a coma twenty years ago. It’s safe to say Nina isn’t ready to forgive Madeline, and in the spoiler video she throws her mother on the couch and jumps on top of her while screaming.

General Hospital spoilers also tease that on Friday, October 17 GH fans can expect to see Kiki discovering Silas passed out on the floor after his run-in with crazy Nina; meanwhile, a panicked Ava’s labor intensifies, and Bobbie tries to talk Carly out of marrying Franco.

So, GH fans, why do you think Franco is visiting Heather? Is she part of his plan to destroy Sonny? How far do you think crazy Nina will go — is Madeline in serious danger? Let us know what you think in the comments below and don’t forget to check CDL tomorrow for more GH spoilers.