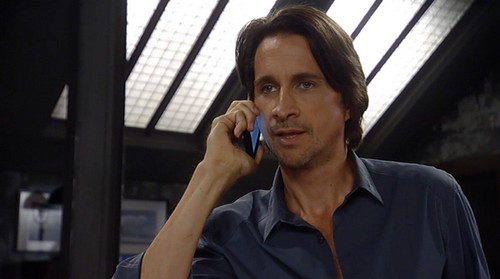 General Hospital spoilers for October 13-17 tease an exciting week for GH fans. The Fake Luke mystery is set to heat up, meanwhile back in Port Charles the drama is set to reach a peak as the feud between Franco and Sonny intensifies and shocking revelations are made.

Monday October 13: General Hospital spoilers reveal that Liesl shares an intense reunion with her estranged sister Madeline, AKA Magda. Meanwhile in Europe, Patrick, Sam, and Tracy make a shocking discovery when they are waiting for Fake Luke. Back in Port Charles Elizabeth receives some interesting news about her mysterious patient.

Tuesday October 14: Silas recently discovered that Nina has been lying to him and is very capable of walking on her own two feet and realizes that there may be more that she is hiding, so he decides to confront her. Britt and Nikolas have a heart to heart over their relationship, and decide whether or not to make it official.

Wednesday October 15: According to General Hospital spoilers, Franco and Silas have a heated discussion regarding Silas’s wife Nina. Meanwhile, Nina is busy blackmailing her ex-nurse Rosalie over a secret that Rosalie has been hiding. Ava’s pregnancy pains intensify and her unborn Corinthos baby is in serious danger.

Thursday October 16: GH spoilers for October 16 tease that Morgan tries to find Ava some medical help without alerting Sonny to her whereabouts. Nathan learns that his sister Nina hasn’t been exactly honest with him, and learns some surprising news. And General Hospital spoilers reveal that on Thursday’s episode of the ABC soap opera, Franco contacts Michael and has a proposition for him.

Friday October 17: On the October 17 episode of General Hospital, Franco and Sonny continue scheming against each other. While Franco works on his master revenge plan, Sonny plots to take Franco out without getting any blood on his hands. Across town Nina is working on a scheme of her own, and seeks assistance from an unexpected ally.

So GH fans, why do you think Madeline West has returned to Port Charles? Does Elizabeth learn that her mystery patient is Jason Morgan? And, what could Rosalie’s big secret be? Are you Team Sonny or Team Franco? Let us know what you think in the comments below!