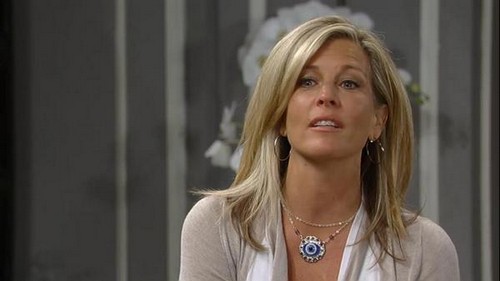 Jordan rushed to tell Shawn that a hit was being taken out on Michael, but she may have been a little too late to save the lad from murder. On Monday, Shawn rushed into Michael’s apartment when he and Rosalee were being held by gunpoint, without any back-up. According to the General Hospital spoiler video for September 30, it looks like Shawn’s rescue mission was a failure. In the GH promo, Michael and Fake Luke’s hit-man are seen wrestling with a gun between them, and then suddenly a shot rings out.

The odds of the GH writers killing off Michael Corinthos are slim to none. There haven’t been any rumors floating around that Chad Duell is exiting the ABC soap, and no spoilers have teased the death of a major character. Regardless of whether Michael lives or dies, one thing is for sure, all hell is about to break loose in Port Charles.

The Jerome Family and Corinthos Family have not been on good terms for a while now, but the latest hit on Michael will mean all out war and Sonny will not rest until Julian pays for the attempt on Michael’s life. The irony of it all is that Julian isn’t even responsible for the hit… it was his boss Fake Luke.

So, GH fans, do you think that Fake Luke’s hit-man will kill Michael Corinthos? What about Rosalee? How do you think Sonny will retaliate when he learns about the hit-man? Check out the promo video and let us know what you think in the comments below. Don’t forget to check CDL tomorrow for more GH spoilers.