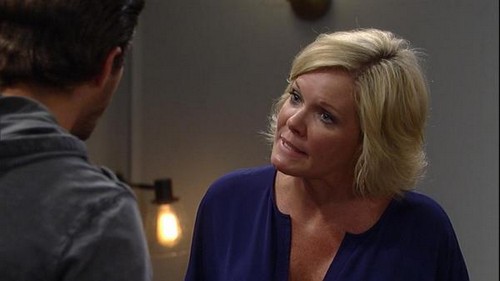 General Hospital spoilers reveal that the mob war between the Jeromes and the Corinthos will really be heating up during the week of September 29 – October 3. It was recently revealed that Fake Luke is not happy that Ava Jerome didn’t follow through with her information on Sonny or kill Michael Corinthos, so he has sent a hench-man to clean up Ava’s mess for him. According to General Hospital spoilers, Michael’s life is in grave danger, and Fake Luke is determined to have the young Corinthos killed so that he can take over ELQ.

However, the jig is up for Fake Luke. Dante, Tracy, and Alexis have all put two and two together and figured out that Fake Luke is Julian‘s boss and financing the Jerome crime family. According to General Hospital spoilers for the week of September 29, Alexis begins hounding Julian for information on his MIA boss. And, Tracy manages to set up a meeting with Fake Luke to discuss his involvement in the Port Charles mob wars. General Hospital spoilers also tease that Patrick and Samantha decide to get in on the Fake Luke action, and begin trying to track down the mobster so they can get a few answers of their own.

Jason Morgan is currently clinging to life at the hospital, however his face was so damaged from his run-in with Ava Jerome’s bumper that no one seems to recognize him. But, according to General Hospital spoilers, Elizabeth holds vigil over her mysterious patient and begins to build a rapport with him during the week of September 29th, and by the end of the week she will learn whether or not her patient will recover. Fans can also expect Ava to share a secret with Kiki and Morgan about why Sonny wants her dead, and Patrick tells crazy Sabrina who he thinks really caused the car accident that killed Gabriel.

So GH fans, who do you think will figure out that Fake Luke is an impostor first, Alexis, Tracy, Patrick, or Sabrina? Who do you think Fake Luke is? Do you think that Michael will be harmed this week? And what about Ava’s secret, does she tell Kiki and Morgan that Sonny killed AJ? Let us know what you think in the comments below and don’t forget to check CDL tomorrow for more General Hospital spoilers.