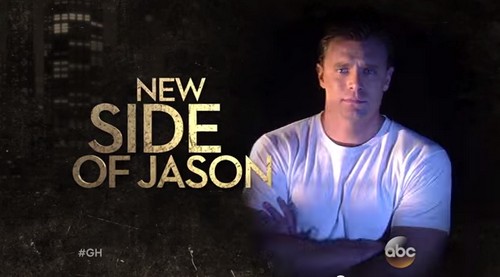 General Hospital spoilers have been teasing Jason Morgan’s return to the ABC soap opera for months, and Y&R alum Billy Miller recently stepped into the role to replace Steve Burton. Miller’s controversial arrival in Port Charles has been pretty uneventful thus far, no one knows that he is Jason Morgan, and the only person he has really interacted with is Liz Webber. But, an all new General Hospital spoiler video gives GH fans an idea of what they can expect once Jason Morgan has recovered from the accident.

In ABC’s all new General Hospital promo, Billy Miller poses as the new Jason Morgan. The voiceover on the video asks GH fans, “What if your missing father, husband, enforcer, suddenly came back? Would you care what he looked like? It’s an all new side of Jason!” The video is no doubt trying to appeal to all of the disgruntled General Hospital fans who are upset that fan-favorite Steve Burton has been replaced. It’s basically ABC’s way of saying, “Hey, just be happy you got Jason Morgan back! It doesn’t matter what he looks like!”

So far Billy Miller’s arrival in Port Charles has been pretty mellow among fans because no one knows it is him, and his face is almost completely hidden with bandages. Once Jason Morgan recovers and is up and interacting with other characters, all hell is going to break loose on the internet. A slew of GH fans are still upset about the recasting of the character. It’s always sad to see an actor go, especially someone like Steve Burton. But, before you start boycotting Billy Miller and writing crazy letters to ABC, just remember, Steve Burton left on his own, he was not fired or replaced, and he has said over and over that he is happy at Y&R. Billy Miller is a phenomenal actor, and General hospital fans should feel lucky to have him.

So GH fans, have you checked out the new promo? Are you as excited as we are for Jason Morgan to get out of bed and start interacting with the residents of Port Charles? Who do you think will figure out first that Liz’s mysterious patient is none other than Jason Morgan? Let us know what you think in the comments below!