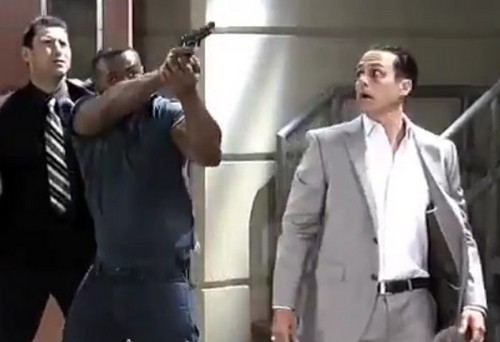 This summer the drama in Port Charles is really heating up, and a recent General Hospital spoiler video proves that the excitement has just begun. The GH promo teases “Rivalries are rising, tension is mounting, summer in Port Charles is about to blow up.”

The General Hospital spoiler video features all of the major players in the Port Charles mob war, Sonny Corinthos, Ava Jerome, Julian Jerome, and Jordan and Shawn. According to GH spoilers, Ava Jerome will seek help from the last person anyone expected, her bother Julian. Ava confides in Julian and tells him that Sonny is basically holding her hostage and plans to kill her once she gives birth to the Corinthos baby she is carrying. It looks like Julian might actually come through for his estranged sister, and in the promo he pulls a gun on Sonny Corinthos and threatens, “come near my family and I’ll tear you apart.”

Julian isn’t the only Port Charles residents holding people at gunpoint this summer, Jordan and Shawn are both seen drawing their guns as well. And, the most interesting part of the promo is a huge explosion, which will most likely cause multiple injuries or deaths. Rumors have been floating around the Internet for a while now that there would be a deadly explosion in Port Charles, but there is still no news on where the explosion takes place or which characters are affected by it.

Check out the General Hospital spoiler video, and let us know what you think in the comments below. Do you think that Julian really comes to his sister’s aid after everything that she has done and all of the times she has betrayed him? And, what about the explosion? Do you think any of our GH characters will be killed? Share your theories below, and don’t forget to check CDL tomorrow for more General Hospital spoilers.