General Hospital Spoilers: Mickey Tries to Murder Jordon After Catching Her With Shawn Planting a Bug? 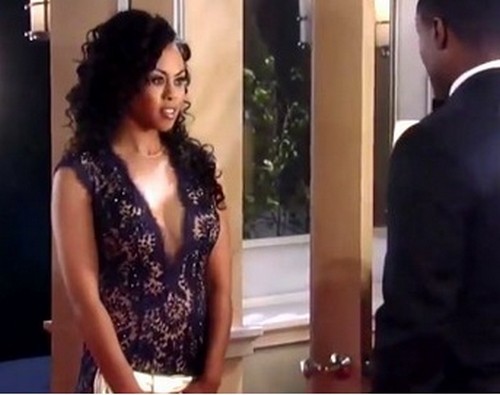 According to General Hospital spoilers, one of our newest Port Charles residents is in serious danger! It was recently revealed that TJ’s mom Jordan is actually an undercover agent, and is working from the inside to bring down Fake Luke’s drug trafficking organization. After Rafe’s accidents, the PCPD will feel more pressure than ever to bring down the drug organization, and has reason to believe that heroin has made its way in to Port Charles, on top of their cocaine problem.

The August 4th edition of ABC Soaps in Depth teases some major drama coming up for Jordan, and her cover may be blown while she is trying to get closer to the new mobster in town, Mickey. The magazine goes on to say, “Jordan sneaks in to Mickey’s room before their date and plants a listening device. But, in a case of rather unfortunate timing, Shawn has the same idea at the same time! When the enforcer’s jealousy gets the best of him, Shawn and Jordan’s heated argument gets even hotter…just as Mickey arrives back at his room!”

There is no doubt that when Mickey catches Jordan and Shawn sharing a moment in his room, he will have some questions for Jordan. And, will probably also be furious that Jordan has been leading him on. It’s safe to assume Mickey will do some research on Jordan after the fact, and there is a good chance he could learn that she is an undercover agent.

So GH fans, do you think that Jordan’s cover will be blown? If Mickey does realize she is an undercover agent, do you think he will try to kill her? And, what about her and Shawn, do you like them together? Let us know what you think in the comments below and don’t forget to check CDL tomorrow for more General Hospital spoilers.